Bidders at charity auction in aid of Down's Syndrome Scotland won a Firefighter for a Day experience with SFRS teams from Motherwell and Cambuslang. 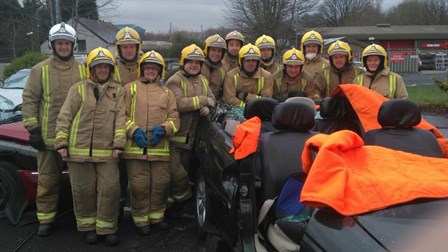 The ‘Firefighter for a Day’ experience was the sought-after prize at an auction held in support of the charity, which works to help people living with the condition realise their potential and provides their parents and carers with vital support services.

Above: Poppy Gogarty, whose family arranged the event to support Down's Syndrome Scotland. Her gran, Betty Fair, was among the 'firefighters for a day'.

Group Manager Owen Hanratty, the SFRS head of service delivery in North Lanarkshire, said: “There is a great tradition in the fire service of doing our bit to help charities and this was a chance to support a terrific cause.

“There was a lot of interest in the Firefighter for a Day experience and the money raised will help Down’s Syndrome Scotland continue to make a real difference.”

The prize donated by SFRS was offered as part of an auction organised by Betty Fair’s daughter Kim Gogarty. It generated a whopping £2,260 for the charity, which has branches across the country.

Kim’s daughter Poppy, aged three, has Down’s Syndrome so the Rutherglen family know children living with the condition are unique individuals and the importance of parents and carers having access to support as they help their child fulfil their full potential.

She explained: “When my daughter Poppy was born and diagnosed with Down’s Syndrome we felt shock, anger, denial and dismay with a lot of guilt too.

“We also felt a sense of loss for the baby that we were expecting to have.

“Over time these feelings have gone as we watched her begin to grow and develop her own personality with the help from the team at Down's Syndrome Scotland.

“Raising money was a way of giving back for their continued support and helping them support other parents who find themselves in the same position.”

Further information on Down’s Syndrome Scotland and the services it offers can be found on the charity’s website at www.dsscotland.org.uk.