Man and woman rescued from fire in North Ayrshire 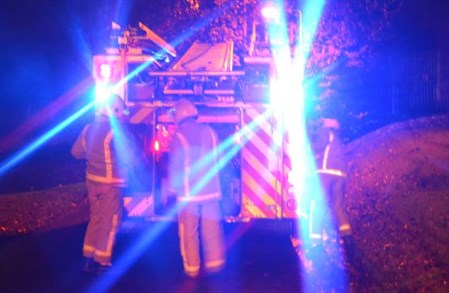 Johnstone Operations Control received a 999 call at 3.18pm reporting a fire at a block of flats on the town’s Main Street. Three appliances were immediately mobilised from Kilbirnie, Dalry and Ardrossan (community fire stations).

On arrival crews found the ground floor well alight with reports of people trapped inside. Two firefighters in breathing apparatus were then sent into the property with a high pressure jet.

A man and woman were removed from the flat and administered with oxygen therapy by firefighters. One person suffering from smoke inhalation was subsequently taken to Crosshouse Hospital by the Scottish Ambulance Service.

Crews had the fire extinguished within half an hour of arrival and stayed until 7.37pm to ensure there was no further threat. Police Scotland colleagues set up a cordon and managed traffic around the scene until firefighters left.

Following the incident, the Scottish Fire and Rescue Service (SFRS) has again appealed for everyone to ensure their home and those of people close to them are protected by working smoke alarms.

Free home fire safety visits are available from SFRS by calling the freephone number 0800 073 1999, by texting ‘FIRE’ to 80800 or by filling in an online form at www.firescotland.gov.uk.

During a visit, firefighters check to ensure the home is protected by working smoke detection and will even provide and install smoke alarms where the life-saving devices are found to be needed.

Residents are also advised to consider having a heat alarm installed within the kitchen, as the devices provide additional early-warning of a fire without activating due to small amounts of cooking-related smoke.