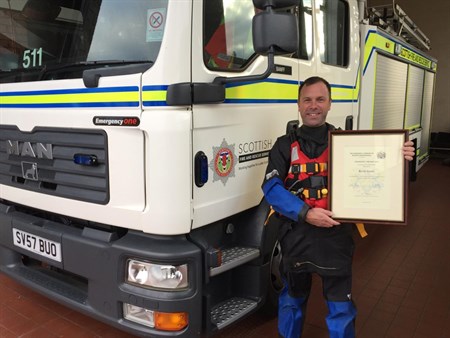 A dedicated firefighter who helped rescue a woman from a sinking car has been commended for bravery.

Crew Manager Kevin Smith raced to the scene after being alerted to the emergency at Macduff Harbour, Aberdeenshire.

The highly-experienced firefighter entered the car to get to the casualty and get her to safety. She has since made a full recovery.

Kevin, 43, is a wholetime firefighter and works as a Scottish Fire and Rescue Service training officer in Aberdeen. He is also a member of the retained crew at Banff and trained in water rescue.

He and his crew were alerted on 26 October, 2015 to reports that the car had gone into the harbour with the woman inside.

Kevin said: “When we got there it was clear there was someone inside the car and the vehicle was more than halfway into the water.

“I was assisted by two fishermen at the time, who helped get a line around the car which was sinking. We then got a line around her and she was placed in the care of paramedics. Thankfully she has made a full recovery, which is amazing.”

The married dad-of-three was recently contacted by the Worshipful Company of Security Professionals (WCoSP) and told he was to receive the Sheriff’s Award for Bravery.

The certificate of commendation aims to recognise and honour individuals who have shown courage and initiative in protecting people, property or liberty.

It is organised by the WCoSP, with the endorsement of the Sheriffs of the City of London.

Kevin was invited to attend a formal ceremony at Salter’s Hall in London earlier this month to receive his certificate.

But he said that he had responded by drawing on his skills and training.

He said: “I find it being called an act of bravery quite embarrassing because I just think I did my job.

We made a good team on the day and being water rescue trained was definitely a bonus.”