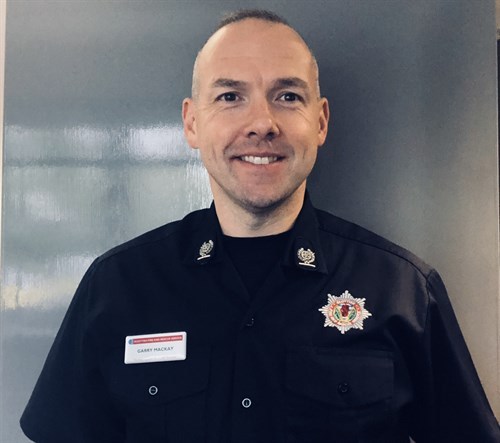 A senior firefighter has warned Scotland's drivers to think ahead this winter - after earlier this year coming to the aid of several hundred motorists stranded in a snow storm.

March saw the Scottish Fire and Rescue Service join its partners in assisting the drivers who had become trapped while travelling amidst the Beast from the East.

Firefighters formed a convoy of 4x4s after Central Scotland’s M80 motorway was turned into a virtual “car-park”.

Crews worked with North Lanarkshire Council and other agencies to provide the trapped drivers with food, water and blankets.

Firefighters also tapped into their own supplies and packed as much as they could – including hundreds of bottles of water- before setting off to help.

Local Senior Officer Garry Mackay was involved in the mission.

The North Lanarkshire LSO assisted drivers who were stuck in perilous conditions for more than 11 hours - including a cancer care specialist who had attempted to reach her place of work.

And while he wouldn’t hesitate to answer the motorway SOS call again, LSO Mackay is urging drivers to ensure they are prepared before travelling this winter.

Reflecting on his experience, LSO Mackay said: “There was six or seven miles of cars ... and they had become completely stuck.

“As soon as we emerged onto the M80, you could see cars trapped.

“There was vehicles at different angles, lorries across the road, abandoned cars – we were the only moving vehicles on both sides of the motorway.

“It was very strange.”

LSO Mackay continued: “What we were effectively tasked with doing was to provide an escort to non-emergency personnel, but also to work as a team to make our way up and down the length of vehicles and supply what was required.

“We met people who had been in their cars since 9am – this was eleven o’clock at night.

“There were a number of people with absolutely no provisions at all, so they were massively appreciative of the arrival of food, water and blankets.

"I spoke to one woman who was a nurse at a cancer care centre and she had spent four hours trying to get to work, only to get there and be told she should just go home - she turned round and that was her stuck for 11 hours.

“I think people were massively appreciative when they saw we had arrived. They were grateful that everyone involved was making efforts to help.”

With the temperature dropping and the nights drawing in once more, LSO Mackay is hoping drivers heed the warnings - and prepare to travel responsibly this winter.

He explained: "The biggest lesson that anyone could take away from this is that, when you are stuck, it’s very difficult to get going again.

“Fundamentally, if we get conditions like this, people need to ask themselves if their journey is absolutely essential.

“If it’s felt that it is, then please put in place sufficient provisions - ensure you have a full tank of fuel, a fully-charged mobile phone, warm clothing, a small shovel and some food.

“The most important thing to remember for us all is: 'Be prepared'.

For more information on how to remain safe while travelling this winter visit .

In addition to its own resources, the SFRS is able to call upon members of the public who have equipment which can assist firefighters.