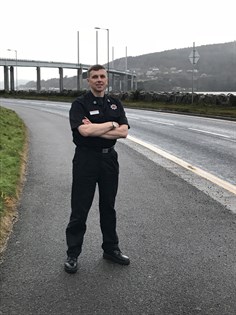 THE Scottish Fire and Rescue Service has appointed a new Local Senior Officer for the Highland area.

Veteran firefighter Rab Middlemiss – who was born and raised in Inverness - took up the post in December.

The former Royal Marine has travelled as far as Texas to train in specialist areas during his 20-year Fire and Rescue Service career.

The appointment was welcomed by the Scottish Fire and Rescue Service’s Deputy Assistant Chief Officer for the North of Scotland, David Farries.

He said: “I am pleased to announce that Rab Middlemiss is taking up the reins as our new Local Senior Officer for Highland.

“He will deliver local solutions to local challenges - with the reassurance that the Scottish Fire and Rescue service is a national organisation with all the benefits of scale and support that this brings.”

He spent six years in the Royal Marines and during this time he experienced operational service in Northern Ireland and Iraq.

He signed up to become a frontline firefighter in Perth and Dundee in 1994 and was quickly promoted to an instructor with responsibility for ensuring the effective delivery of training to retained and volunteer firefighters.

This work also took Rab to Texas in 2003 where he gained qualifications and specialist knowledge in urban search and rescue techniques.

In 2010 he was promoted to the position of Group Manager for Operations Control in Dundee and went on to play a key role locally in transitioning the former legacy service into Scotland’s single service.

Most recently Rab, who is a keen runner and climber, has supported the SFRS Board and its committees as the UK’s largest fire and rescue service takes the first steps towards transforming to better meet Scotland’s needs.

LSO Middlemiss said: “I am absolutely delighted to be given this opportunity to return home to serve the communities of the Highland area.
“At the same time I very much look forward to continuing to develop positive relationships with other public, private and third sector partners to meet the priorities of our local plan.”