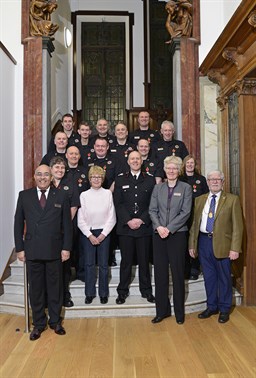 A group of firefighters and colleagues with almost 300 years of combined service were recognised at a special award ceremony.

The 16-strong gathering was brought together at Perth Civic Hall on Tuesday, March 13, where they received Long Service Good Conduct medals and pins.

The medals were presented by Deputy Assistant Chief Officer David Farries of the Scottish Fire and Rescue Service to acknowledge their 20-year commitment to communities..

The firefighters and staff are based across the North Service Delivery Area.

DACO Farries said: “I was delighted to present these Long Service and Good Conduct medals to some of our amazing staff in the Scottish Fire and Rescue Service.

“Every single one has earned this recognition – for their outstanding and exemplary conduct over the past 20 years and for their long and loyal commitment to the service.

“Our firefighters are always prepared to go that extra mile to protect Scotland’s communities – however they are enabled by our dedicated support staff.

“Whether serving on the frontline, or working to support the service behind the scenes – all are equally deserving of these awards.”