Woooft it's windy out there today! Stay safe and follow @metoffice and @policescotland for regular updates! 🌬️🐶 pic.twitter.com/UXDq7ZQrrg 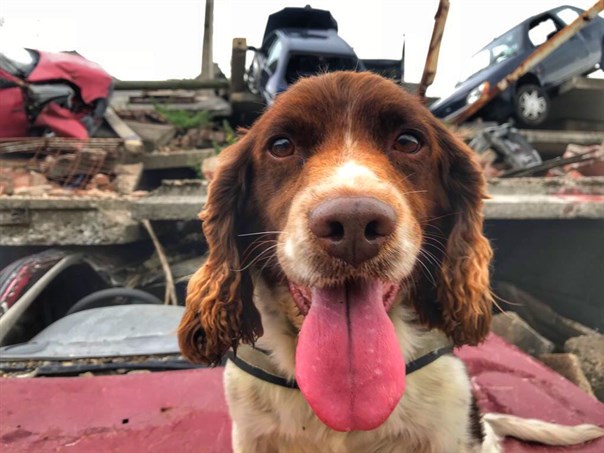 Diesel – the Scottish Fire and Rescue Service’s urban search and rescue dog – burst onto Twitter in August and has since racked up almost 4,000 followers.

And he is now looking to showcase his skills and extend key safety messages to an even wider fan base across Facebook and Instagram.

Speaking about Diesel's success, SFRS Deputy Chief Officer Iain Bushell said: “Having Diesel on twitter is a fantastic asset to the Service.

“He is able to chat and engage with members of the public about how he works to keep people safe – and he has received an outstanding reaction.

“I’m still not quite sure how he uses the computer keyboard … but his work so far has been fantastic.” 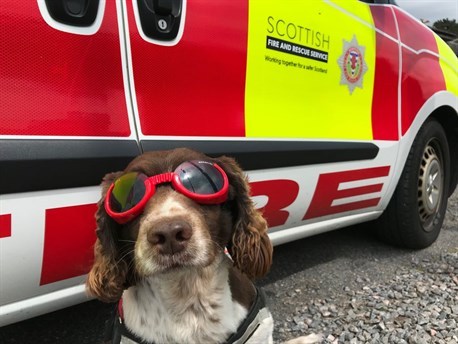 Diesel achieved national fame after it was revealed he has his own unique protective equipment including booties and doggles.

The Springer Spaniel  is a vital member of the SFRS Urban Search and Rescue’s (USAR) National Response and is deployed anywhere across Scotland with his dedicated handler, Gary Carroll who is a Crew Manager based at Portlethen, Aberdeenshire.

The pair are also part of a specialised UK International Search and Rescue (UKISAR) team which can be mobilised across the world at a moments’ notice.

They assisted at the devastating Nepal earthquake which sadly claimed the lives of thousands of people and injured countless others.

It is therefore vital that Diesel – who can travel by helicopter to carry out search and rescue missions across Scotland or abroad -  is kitted out with the protective equipment.

The doggles help to shield his eyes from dust and debris thrown up by landing and hovering aircraft while the special booties protect his paws from rubble and glass as he searches collapsed buildings.

DCO Bushell said previously: “It is clear that Diesel is held in the very highest regard not only by ourselves but by the Scottish public – he is indeed a very good boy.

“These pieces of equipment are absolutely vital to protect this outstanding and highly valued member of our team.

“They enable Diesel to enter some of the most hostile environments, not only reaching casualties but helping protect his firefighter colleagues as they work in risk zones.

“It is crucial that we have this capability as the Scottish Fire and Rescue Service enhances wherever possible its response to major incident and also seeks to transform to meet modern risks such as terror attack.”Gary added: “We are a single service providing an unrestricted response to emergencies occurring anywhere in Scotland - and beyond - if requested to assist.

“Diesel and I have worked together for many years in some of the most challenging environments, and there is no doubt whatsoever that he is integral to that response.

“We have an incredible bond and he is a very special wee dog – and to the point where we think he really does deserve his own dedicated online accounts.

“It will provide everyone with a real insight into not only how he is trained and his serious capability but also how he likes to spend some down time playing with his ball.”