Firefighters and police are emphasising the importance of fire safety in the home. 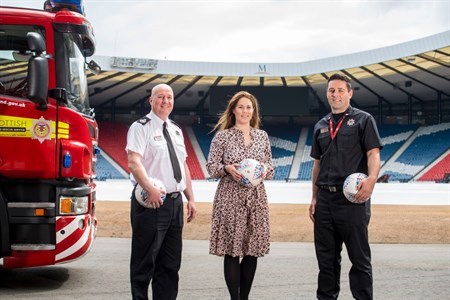 The Scottish Fire and Rescue Service (SFRS) has signed a Memorandum of Understanding (MOU) with the SPFL Trust.

Former SPFL defender Frank McKeown was on the scene at Hampden Park for the announcement, but this time he swapped his football kit for a firefighter’s uniform, as he is now a Crew Manager at Easterhouse Fire Station.

The MOU is an agreement between the two parties to explore opportunities such as best practice and training.

Although the contract is not legally binding, it shows a commitment to working closely together in the future.

Frank, who has also recently joined Stranraer FC as first-team coach, said: “It’s fantastic to see the Scottish Fire and Rescue Service and SPFL Trust – two organisations who do such important work in the community such as supporting vulnerable and disadvantaged members of society – join together in this way.”

Frank was joined by Assistant Chief Officer of the SFRS, Ross Haggart, who is the Director of Prevention & Protection.

He said: “We are very proud to officially mark the signing of this Memorandum of Understanding between the Scottish Fire and Rescue Service and SPFL Trust.

“Through working with the SPFL Trust, we can utilise the power of football to support people, young and old, across Scotland’s communities, helping to keep them safe and achieving their goals as a result of this unique partnership.”

Nicky Reid from the SPFL Trust said, “The purpose of the MOU is to form a closer working relationship with the Scottish Fire and Rescue Service, through sharing ideas and training. It’s a fantastic agreement to have and will be a huge benefit to both sides. We look forward to working with the SFRS in the future.”