More than six kilometres of land was devastated by the blaze. 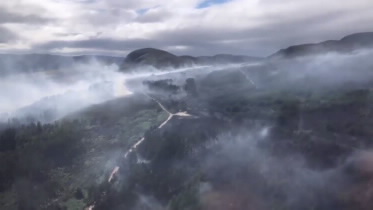 A veteran firefighter has told how a ‘mountain looked like it was burning’ after being given a helicopter view of one of Scotland’s biggest wildfires last year.

Deputy Assistant Chief Officer John MacDonald took to the air in July 2018 over Ben Bhraggie near Golspie as he coordinated a massive Scottish Fire and Rescue Service response.

Crews were in attendance at the incident for more than seven days, with more 450 firefighter and 97 appliance attendances drafted in from 25 stations from across the north of Scotland to tackle the blaze.

And as firefighters fought to protect the nearby village and homes, more than six square kilometres of mountainside was devastated by the flames.

Despite more than 27 years of experience on the frontline, DACO MacDonald says the scale of the incident ranks it as one of the largest he has tackled to date.

He said: “When you are on the ground, you don’t get a real sense of the scale.

“Wildfires are certainly by no-means unusual, but this one ranks up there with two or three others that I remember as being particularly large in terms of the area directly involved and the resources required to fight the fire.

“For all intents and purposes, when you got above it the whole area was shrouded in smoke and pierced with fingers of bright orange and red flames – the mountain looked like it was on fire.”

As the fire spread across the 1,300-foot-tall Ben, it took in a forest plantation, heather, gorse and even peat bogs – with burning embers sinking through the ground to smoulder up to a meter below the surface.

And DACO MacDonald says it is the difficult terrain and the stubborn nature of a wildfire that can make it one of the most arduous incidents for a firefighter to tackle.

He said: “It is extremely physical work for our firefighters – we had one of the firefighters who was wearing a fitness tracker and they covered ten miles, up and down the hill in full firefighting gear and carrying hoses, equipment and firefighting in between.

“But their dedication to it was unwavering – many of these men and women are retained firefighters or part of our dedicated community response units – who had given up their weekends with their families or their primary employment to be there.

“Getting them to come down off that hill and actually take a break was the difficult bit – they wanted to get stuck in and see this through.”

He said: “When you take time to consider what went into responding to this fire – the expertise, the equipment, the dedication shown by all – it was an incredible effort on all fronts.

“At the end of the day, no properties were damaged, no one was hurt – either firefighters or members of the public and the fire was contained and prevented from spreading – and we considered that a job well done.”

And the sustained efforts of firefighters to protect the community did not go un-noticed.

DACO MacDonald added: “The community effort here was outstanding – local businesses supplied dozens of crates of food and water, we had more than 100 hot chip shop suppers donated, the community council reached into their own pockets and gave several hundred pounds of its own money to make sure firefighters were fed and watered.

“At the incident ground itself there was a very committed group of ladies and helpers who set up a field kitchen at our command point and staffed it 24-hours a day, off their own backs.

Every year, firefighters across Scotland are called to tackle large numbers of wildfires.

The fire at Ben Bhraggie was just one of dozens across Scotland throughout last year.

And David Farries – the Service Deputy Assistant Chief Officer for the North of Scotland – said the co-ordinated response was made possible by a national service.

He said: “There’s no denying that these incidents are resource heavy – we had appliances and officers attending from across the country at Ben Bhraggie.

“However, as a national service, we have the capability to respond to these large-scale incidents, with the resources that are needed, while ensuring that there is no loss of cover and that we continue to respond to every emergency elsewhere.

“And this is all co-ordinated by our brilliant Operational Control staff and senior officers overseeing the larger national picture.

“And as we move forward, we are only looking to build on this resilience.”

DACO Farries was also keen to make sure that a lesson was learned from this significant fire, which showed the potentially devastating effect wildfires can have.

He said: “This protracted and challenging incident, along with those we have seen recently at Melvich near Thurso and Dunphail in Moray, serve as a stark reminder to members of the public and tourists that they must take great care when visiting Scotland’s countryside during dry spells of weather.

“This is a well-known and popular spot in the area – and it was devastated by this fire.”

For further advice and information about wildfires and how to prevent them visit: /your-safety/wildfires.aspx or www.outdooraccess-scotland.com/