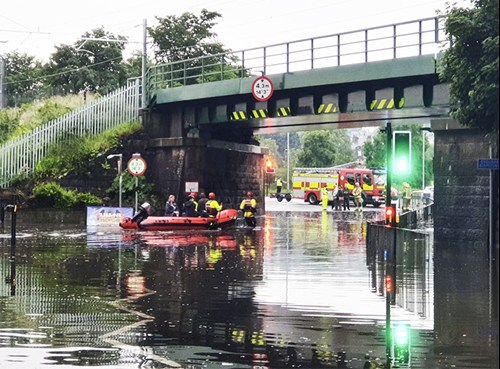 FIREFIGHTERS in Stirling assisted 14 people to safety after rapidly rising flood waters stranded them in a rugby club.

Crews used specialist skills and equipment to transfer people from the affected rugby club to a safe area.

The Scottish Fire and Rescue Service attended several flooding related incidents on Monday while a severe weather warning was in place.

“These firefighters are trained and equipped to deal with the most arduous of water rescue incidents including rescue from fast flowing rivers, rescue from gorges and ravines involving ropes and harnesses as well as this form of rescue from relatively static flood water.

“I am delighted that the 14 persons trapped within the clubhouse at Stirling County Rugby Club were rescued safely and without so much as getting their feet wet.”

LSO Keith added: “I would like to extend my thanks also to the communities and our partners who once again played a vital role in ensuring all incidents were brought to a safe conclusion.”