Firefighters raises more than £1,000 for charity by growing massive mohawk

A metal-mad firefighter has turned lockdown into rockdown – by growing a massive mohawk in the name of charity. 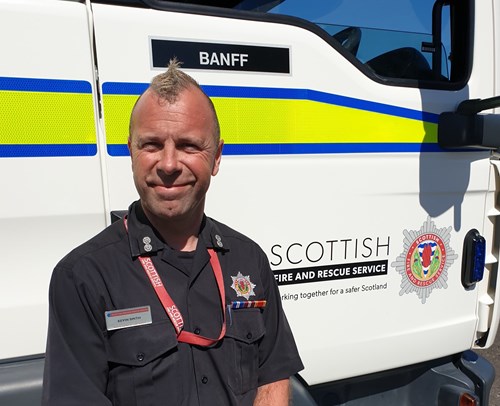 However, when one colleague offered him £30 to keep it all week, he realised he might have found a way to raise money for a charity close to his heart while in lockdown.

Now he has already raised more than £1,000 for the Scottish Fire and Rescue Service Family Support Trust.

Kevin, who is based at Banff Community Fire Station in Aberdeenshire said: “I actually keep forgetting I have it.

“I work within training for the service so during lockdown I am regularly moving between stations locally as part of essential business and every time I walk into another one the crews all look at me for a second before bursting out laughing.

“It was just supposed to be a big joke for friends and family at first, giving everyone something to laugh about but it’s already became so much more than that.

“I can’t thank everyone who has donated already enough, it’s humbled me greatly and I’m just glad it can give someone a smile and raise some money for a good cause.”

Thankfully Kevin, who has been with the service for more than 27 years, is already a huge fan of rock music, with bands such as Guns N’ Roses, Motley Crue and Linkin Park sitting in his top five favourite bands – a love he shares with his three sons.

He said: “My boys all love rock music, as much as I do, which is fantastic. My wife – not so much and you can hear her groan every time I’m screaming out some Linkin Park in the car.”

But he admits that calls to keep the mohawk could prove difficult – but he has some colourful plans in place.

He continued: “The mohawk is really good fun, and more than a bit unique but I’m not sure it will last longer than lockdown – it makes family photos and things a bit odd.

“But while I have got it, I want to make the most of it. Some people have suggested dyng it the colours of the rainbow to show support for NHS and key workers – but since I’m going to be shaving it right off at some point, I might just spray it gold!”

To donate to Kevin’s charity effort, go to https://www.justgiving.com/fundraising/kevsmohawk?utm_source=whatsapp&utm_medium=fundraising&utm_content=kevsmohawk&utm_campaign=pfp-whatsapp&utm_term=14e9f9f5b90846189d92eb26be5c8e57&fbclid=IwAR0f2QlA-ymsAWz-7Astnb_-InHTFYAVWOu_1C2zkTrY3iDrymn-lW2P_pc