Whilst fighting a serious house fire, Station Officer James Mathieson of the Glasgow Fire Brigade died whilst engaged in firefighting. 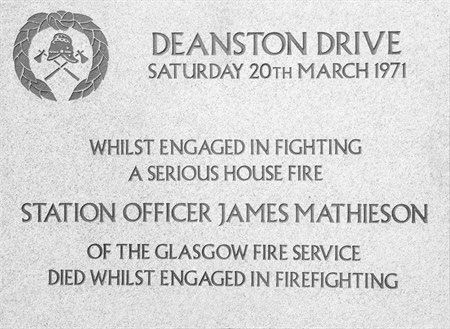 Station Officer James Mathieson, aged 49, collapsed and died when fighting a fire in Shawlands. He had been called to 141 Deanston Drive with his colleagues from Pollok fire station.

Mathieson was engaged in fighting a fire in a top floor flat when the strenuous conditions caused him to collapse. Firemen with oxygen equipment attempted to revive him, but he was dead before the ambulance arrived.

The blaze completely destroyed the flat and badly damaged the roof of the building. Seven families were temporarily evacuated from their homes.

The Glasgow Fire Service of the early 1970s remained busy in an ever changing city. New equipment, current with the advances in technology of the time, was being introduced.

New buildings and developments in Glasgow required fire engines to suit, and advances were being made in that direction with the introduction of Glasgow's own invention, the 'Scoosher' - a lightweight appliance with a mechanism that could be worked by a single operator.