Whilst rescuing members of the public during an intense and difficult fire involving properties at Maryhill Road and Great Western Road, Sub Officer Adrian McGill died after giving his oxygen set to a member of the public who was trapped and awaiting rescue. 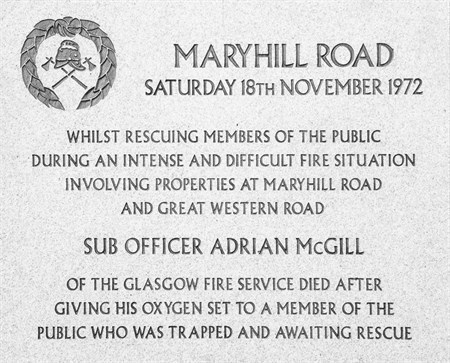 This tragedy for the Glasgow Fire Service came less than three months after the loss of seven firefighters in August at Kilbirnie Street.

Crews were called to a fire in a disused wallpaper shop in Maryhill Road. As the firemen worked hard to save flats above the shop, the fire found a way through to a row of tenements in Great Western Road via a single storey connection. Due to a building defect of about 100 years before, there was no fire wall.

Firemen rescued 15 people by ladders and over 200 people were led through smoke to safety or evacuated from adjacent premises.

Sub Officer McGill sacrificed his life trying to save a resident who was trapped in her top floor flat on Maryhill Road. He succumbed to the effects of smoke inhalation after he got the resident to use his breathing apparatus.

Firefighters rescued the resident by ladder, but she died soon after.