Whilst engaged in firefighting on board the M.V. Pagensand, Station Officer Douglas Mearns of the Glasgow Fire Service died in the ship's hold. 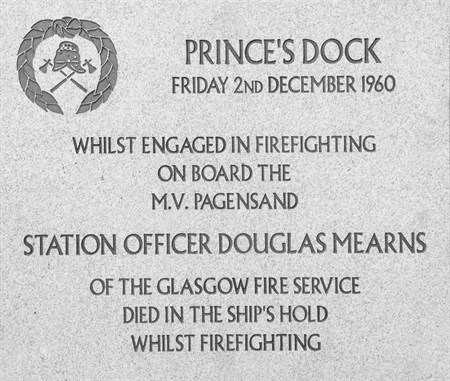 Station Officer Mearns lost his life and 11 firemen and a docker were overcome by fumes and taken to hospital during attempts to put out a fire in the hold of a German cargo ship carrying matches, wood pulp and paper at Prince's Dock, Govan.

By the 1950's, the River Clyde was one of the busiest shipbuilding centres in the world, and Glasgow Fire Service had formed a Marine Division, based at Yorkhill Quay, to protect the many ships and cargo in the Clydeside yards.

Station Officer Mearns had been in charge of the St. Mungo fireboat. Together with a detachment of firemen wearing breathing equipment, he had gone into the hold of the Pagensand to deal with a fire. Almost immediately there were cries for help.

Dockers boarded the ship to help firemen rescue their comrades from the sulphurous fumes, but tragically, Mearns could not be revived.