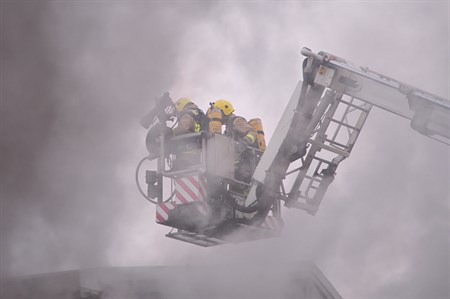 ** NB: The above image is from SFRS stock and was not taking during this incident.

Firefighters battled a blaze at a pub in Coatbridge and protected flats from the flames next door.

Scottish Fire and Rescue Service (SFRS) crews worked for over nine hours to tackle the blaze tearing through the two-storey building in Bank Street.

At the height of the incident six fire engines and around 30 firefighters were at the scene.

Crews were scrambled in response to a 999 call made shortly after 3:35pm on Wednesday (6 July) and the first responders’ initial assault saw teams in breathing apparatus sent into the burning building.

The firefighters also went into the neighbouring flats to ensure no-one was still inside.

With the intense fire consuming the first floor of the bar and breaking through its roof the SFRS crews were deployed to strategic positions surrounding the blaze.

They used several high pressure jets to douse the flames from outside the building.

Other firefighters worked inside the flats, using a thermal imaging camera to check for any sign of the fire spreading.

Crews used ladders and the elevated platform of an aerial rescue pump to strip away tiles from the building’s roof as dampening down operations continued through the evening.

After confirming the fire was fully extinguished the final SFRS crews left the scene around 1am (Thursday 7 July).