Staff recognised for their long service

Firefighters and Support Staff have been given medals and certificates for their loyalty and commitment. 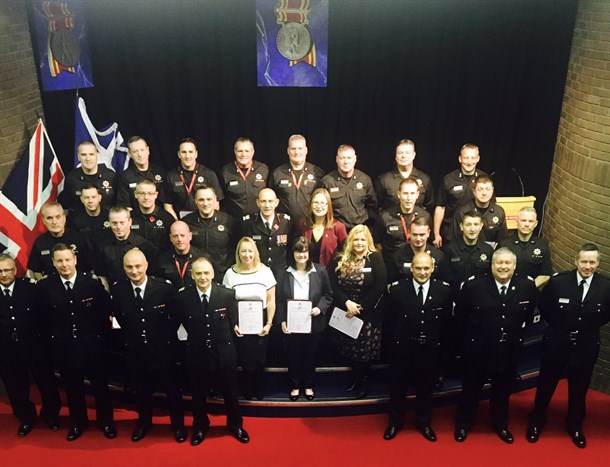 A group of firefighters and support staff colleagues with a combined 460 years of dedicated service were recognised at a special award ceremony today.

The 23-strong gathering was brought together at the West Service Delivery Area Headquarters in Hamilton where firefighters received Long Service Good Conduct medals.

They were joined by support staff colleagues who also received recognition certificates for their 20 year commitment to the fire and rescue service.

The medals were presented by Peter Heath, Deputy Assistant Chief Officer and Kirsty Darwent who is Chair Designate of the Board of the Scottish Fire and Rescue Service on Thursday, November 9.

DACO Heath said: “I am delighted to be here in Hamilton to present the recognition certificates and Long Service and Good Conduct medals to our amazing staff in the Scottish Fire and Rescue Service.

“There is no doubt that every single person here today deserves this recognition.

“Our firefighters are always prepared to go the extra mile to assist in protecting the public and working with communities at times of need and support them to stay safe - but they could not do that without the combined efforts and hard work carried out by our support staff colleagues, many of whom work behind the scenes as part of an outstanding team.

“I am pleased to be able to present them with 20 year recognition certificates – this service could not run without our firefighters and support staff working together, both are equally deserving of these awards today.”