The awards, presented by the First Minister, took place at Edinburgh Castle

Scottish Fire and Rescue Service staff were recognised for acts of bravery at the Brave@Heart award ceremony.

The awards were presented by the First Minister at a special event held at Edinburgh Castle on Tuesday October, 24.

A total of eight fire service staff and two members of the public, nominated by the Scottish Fire and Rescue Service, were among the 47 winners of this year’s awards.

Initiated by the Scottish Government in 2010 to recognise heroic actions, the recipients of the prestigious awards are chosen by an independent panel following nominations from the blue-light emergency services and other rescue organisations.

The winners from The Scottish Fire and Rescue Service were: 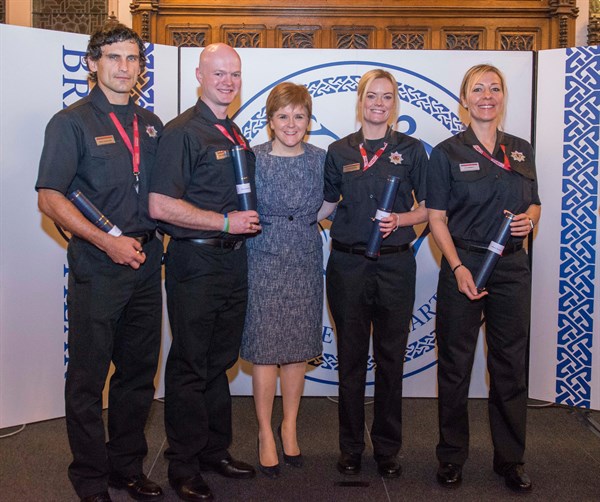 On 27 November 2016, Crew Manager Barry Wright was the Officer in Charge of a fire appliance. Whilst travelling along Drum Street, Edinburgh he became aware of an unconscious casualty within the street who had received multiple stab wounds and was bleeding profusely.

CM Wright immediately took control of the situation and tasked his crew to render immediate casualty care.  The crew who have all been trained in Initial Casualty Care stabilised the victim within the limits of their expertise, stemming the loss of blood and administered medical oxygen.

Upon the arrival of the Scottish Ambulance Service, the crew continued to assist under the direction of the SAS to conduct a full survey and establish the number of puncture wounds and helped stabilise the casualty for transportation to hospital.

It was subsequently determined that the casualty had certainly received life threatening injuries that without the intervention of the SFRS crew may have proved fatal. 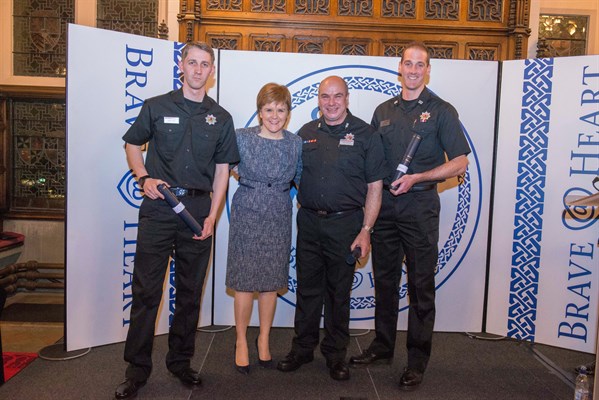 On Saturday 20 August 2016, a call was received reporting a child and possible other persons in water at Aberdeen Beach Esplanade.

WM David Gordon along with his colleagues CM Martin Vardy and FF Jamie Lawrie acted beyond the normal expectation by entering the sea.

Their specialist training gave them additional confidence to perform the rescue, which also included giving rescue breaths to the child whilst in the sea before being picked up by the RNLI.

Their efforts demonstrate outstanding bravery and personal courage in managing such a rapidly developing and initially chaotic incident.

Sadly and so tragically, both the child and mother subsequently died as result of their injuries. 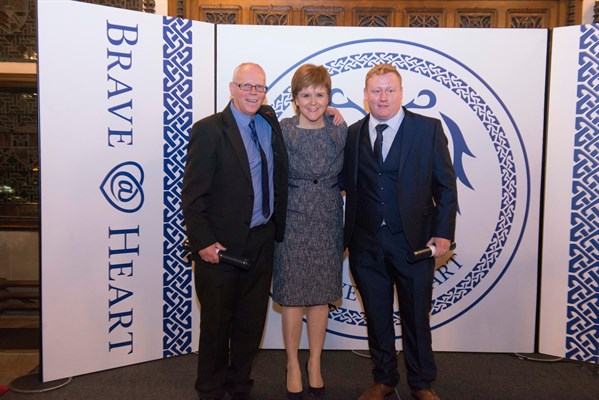 Members of the public Darren Jones and William Burke

On 24 January 2017, The Scottish Fire and Rescue Service received a fire call from West Lothian Care Line, stating that the heat detector within the premises had activated.

Appliances from Livingston, along with Whitburn (RDS), were all mobilised to the incident along with the Scottish Ambulance Service and Police Scotland.

Prior to the arrival of the first appliance, both Mr Darren Jones and Mr William Burke had on two separate occasions entered the premises, having heard the smoke detection system actuating and knowing the occupants health care concerns.

On the first occasion both men entered the premises and rescued the eldest lady (92) then returning to rescue the daughter (69) and placing both ladies in care of neighbours prior to the attendance of the SFRS and Scottish Ambulance Service.

Both then returned to the premises to close the door between the kitchen and the living room of the property to prevent fire spread.  On arrival of the first appliance from Livingston they provided all relevant information on the fire and the two elderly casualties.

Had the actions of the two gentlemen concerned, not taken place then this incident would have finished with a very different outcome and at the very least both casualties would have suffered serious breathing difficulties.

Chair of the Board of the Scottish Fire and Rescue Service, Pat Watters said: "On behalf of the service I'd like to congratulate our personnel on receiving awards, which recognise their great efforts to help others in the midst of emergencies.

"Although faced with very different types of emergency they all drew on their training and experience to protect the public in very challenging circumstances."