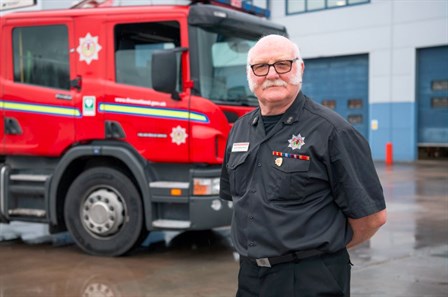 When Dave Farries began his career as a firefighter, the Vietnam War was still raging, Britain had just introduced the decimal coin, and Harold Wilson was in his first tenure as Prime Minister.

The year was 1968, and this fresh-faced teenager had swapped his home in the Scottish Borders to begin a new life as a junior firefighter with the South Eastern Fire Brigade in Edinburgh.

Fifty years on, Dave is now widely regarded as a Scottish Fire and Rescue Service institution.  Indeed, the 66-year-old is one of the longest serving members of any fire and rescue service in the United Kingdom.

Dave’s half-century of public service has included lengthy spells as a firefighter, instructor and investigator, and today he holds the position of a trusted oracle, tasked with cataloguing and preserving the rich heritage of firefighting in Scotland.

"I’ve still got it up here, you see," laughs the granddad of three, wryly pointing to his head.

"Aye, I can’t pretend that I wouldn’t struggle to run up several flights of stairs with a line of hose in my hand and a cylinder on my back today in the same way I used to. But believe me, I’ve got plenty to give yet.

"And anyway, there’s work to do. Who needs retirement when you’ve got the greatest job in the world?

"Listen, I might not get paid a footballer’s wage, but I wouldn’t swap this for anything. The camaraderie, the lasting friendships, the opportunity to provide for my family doing something that I love. You can’t buy that."

Originally from Hawick, Dave has served his entire career in and around Edinburgh and the east of Scotland, and has worked in all but one of the capital’s fire stations.

"I’d no idea what I wanted to do when I left school in 1968," remembers Dave, who works between the Service’s East headquarters in Newbridge and a resource storage facility near Falkirk.

"I wanted to be outdoors, and had planned to go into the Forestry Commission, but I didn’t want to go college. So I moved up to Edinburgh, went into fire brigade digs four days a week, and here I am. Still here."

Recalling his early days in the capital, he says: "Edinburgh was a very different place then. I was a 16-year-old boy from the Borders, and it was a real eye-opener for me.

"When I first went on the run, we had Niddrie, Greendykes, and to a lesser extent Portobello on our patch. They were rough places. The poverty was just unbelievable."

For all his years on the frontline, Dave laughs off the physical strain of the job. "Aye, my body’s certainly took a wee bit of a pounding over the years," he says.

"I’ve still got a few marks and scars, mainly from the old breathing apparatus sets that we used to use. They were fitted with these metal bits that would heat up and scar your face, would you believe? But that was long ago, and dare I say it… I’ve been lucky.

"I ended up in hospital quite a few times, but nothing major. The first time, when a metal hatch nearly took off my finger, then when I got car battery acid in my eye, and once with heat stress after fighting a fire at an old underground bunker in Corstorphine. But I can’t complain. I’ve had worse injuries playing rugby."

Today, Dave lives at home in Currie, a suburb to the south west of Edinburgh, with wife Michelle, 64 and daughter, Linzi.

December has been an especially busy month. When he’s not on granddad duty, raising money for the Fire Fighters Charity, or busy collating and cataloguing a wealth of fire service artefacts, Dave volunteers his services in a very festive way.

"I’ve been Santa for more than 30 years at the nursery my two boys went to," he reveals. "It’s great, it really is. I do the odd Christmas fayre and party too.

"Back at the start, I actually used to arrive at the nursery in a fire engine. I thought, if the kids grow up thinking firefighters helped Santa, then they’d see us as the good guys."

His family - marital and blood - is steeped in firefighting history. Dave’s father-in-law William Connor was a former Deputy Firemaster with Lothian and Borders Fire and Rescue Service, while son, also David, has followed the same lineage and is a high ranking SFRS officer.

"My dad’s clearly left his mark on so many people," says David, 42, who is currently the Deputy Assistant Chief Officer responsible for the North of Scotland.

"He’s always been a quiet and reserved guy, but all throughout my career - I’ve had people telling me how he’s helped them, or how much they’ve enjoyed working alongside him.

"It’s also thanks to people like my dad and his colleagues - veterans of our legacy services, who have led us through periods of great change - that we have such a strong national fire and rescue service in Scotland today.

"To this day, more than 20 years in the job, I’m still ‘Young Dave Farries’ to some. And I’m incredibly proud of that."

During his 46th year in 2014, Dave was awarded the Queen’s Fire Service Medal at Holyrood Palace for his ‘conspicuous devotion to duty’ – but he still insists his tenure pales in comparison to beloved wife Michelle.

"People talk about my service career, and sticking around so long - but Michelle’s technically been in the fire brigade longer than me," he says, without a hint of irony.

"Michelle’s dad, Willie, joined in 1954 and they lived in a brigade house at Lauriston from when Michelle was very young. Believe me, she’s as steeped in the fire service as anyone."

Dave adds: "Then there’s being married to a firefighter for 45 years. That takes someone special.

"It’s a different way of life, you see. You can be away overnight, or for two or three days. Like any other firefighter, I’ve missed my fair share of Christmases and New Years, and other family occasions. That can be difficult.

"And it’s not just the hours. Michelle would know when I’d attended an incident involving a fatality, or something had happened. You didn’t want to take it home. I used to be quiet - Michelle knew that was my way of dealing with and processing things."

"After a few injuries on the field, I had to produce my sick line to Michelle’s dad, who was the gaffer at the time back home at Hawick station," Dave recalls.

"It’s funny when I think about it. Apparently he’d ask Michelle, ‘Do you know this bloody Farries boy? He’s always injured’. We met a little while after that, and it went from there. Forty-eight years later, here we are."

"The grief is still with us," Dave explains. "It never leaves, and it never will. You don’t expect to lose your kids, you expect your kids to lose you. And our Keith was quite a loss. 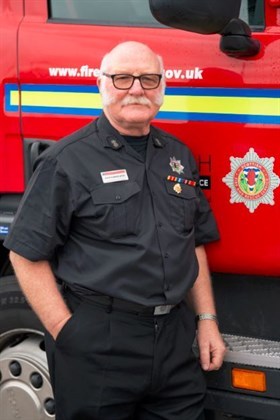 "A friend, who also lost his wee laddie, once told me that it’s like a big sharp stone, right in here," Dave adds, holding his two hands rounded to his chest.

"The stone never goes away, but in time it gets smaller and the sharp edges wear down. It’s always there, but it’s never as big, never as heavy and the pain starts to ease. For me, that’s very true.

"This is something I’ve held on to, and have been able to pass on to colleagues who have lost family members.

"I’d never want anyone to go through what we did, but all you can do is hope you can help other people if you’re ever needed."

For all his years on the frontline, the lasting friendships formed, and the vast knowledge and wisdom passed on across his half century, Dave points to a chance opportunity on a rugby field more than 20 years ago as his most cherished point of his career.

Always heavily involved in the fire and rescue service rugby team, both locally in Lothian and Borders and nationally, Dave was struggling to get enough players for the international match in Wales.

"We always toiled for players when we travelled away, and on this occasion I asked David and Keith if they could come and play," Dave remembers, fondly.

"I don’t remember much about the game itself, but I played in the back row, and my two boys were in the front row. We were a rugby family, and this was the one and only competitive game I got to play with both of my laddies.

"Now, that might not seem much, but it means the world to me. I might not have that memory if it wasn’t for the fire service. This job has given me a memory like no other… something I’ll hold on to forever."