A crew from the city’s Sighthill was met by the sight of two-year-old greater one-horned rhinoceros, Qabid, wedged by his leg and neck. 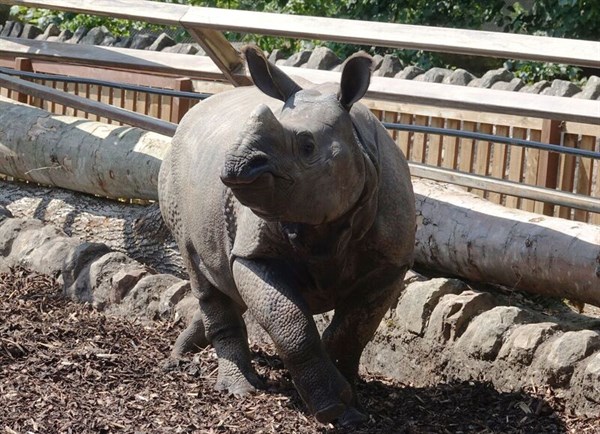 A rhinoceros the size of a small car had to be rescued by firefighters after getting stuck inside his favourite tyre swing – again.

The Scottish Fire and Rescue Service was mobilised to Edinburgh Zoo just before 6pm on Sunday, December 2 to help the stricken animal.

A crew from the city’s Sighthill was met by the sight of two-year-old greater one-horned rhinoceros, Qabid, wedged by his leg and neck.

The firefighters used specialist e-hydraulic cutting equipment to free him once he was sedated.

And the relieved rhino, who has been at the zoo since July, was back bouncing around after the sedative wore off – albeit a bit wobbly on his legs.

“The rhino was stuck tight in the tyre and had to be sedated by the Zoo vets as he was becoming distressed.

“Edinburgh Zoo staff informed me that this event wasn’t the first time he had got himself stuck but he usually manages to get himself out - he very clearly wasn’t so nimble or lucky on this occasion.

“Our crew used specialist cutting equipment which is normally used for the extraction of persons involved in road traffic collisions.”

He added: “Once the firefighters managed to cut the tyre and free Qabid, the zoo vets gave him a drug to counteract the sedative and bring him round - and he was quickly back to his mischievous self.

“It’s not every day that our crews come into contact with such a beautiful animal.”

And this is not the first time that firefighters have stepped into an unusual rescue.

Image: Firefighters with Bertus during his procedure

They supported RZSS Edinburgh Zoo vets during a dental procedure involving Bertus the greater one horned Indian rhino in November 2016.

They drew on their skills of searching collapsed buildings to safely manoeuvre the two tonne animal safely into the correct position for the operation.

Bertus left the zoo in May 2018 and went off to play his part in the European breeding programme (EEP).

Highly-skilled firefighters were needed again in East Kilbride in February 2016 when they teamed up with the farming community to battle through challenging conditions and save the life of a horse.

Firefighters, skilled in rope rescue and water rescue, worked to free the animal, a female named Flash Dance - weighing 440 kilos - from two feet of mud at the bottom of a slope.

The crew then enlisted the help of a nearby farmer whose JCB digger was used to scoop away six feet of mud - allowing firefighters to get underneath the animal, secure ropes around her body and hoist her clear - She was tired, cold and dirty but otherwise uninjured.

Darren McGarry, head of living collections at Edinburgh Zoo, said: “Our greater one horned rhino Qabid loves to play with his tyre, it’s one of his favourite things to do.

“On Sunday, he managed to get his head and a leg stuck while playing and we had to contact the Scottish Fire and Rescue Service for assistance to use their specialist cutting equipment.

“The tyre was safely removed and Qabid is doing fine. We would like to thank the firefighters for their help.”