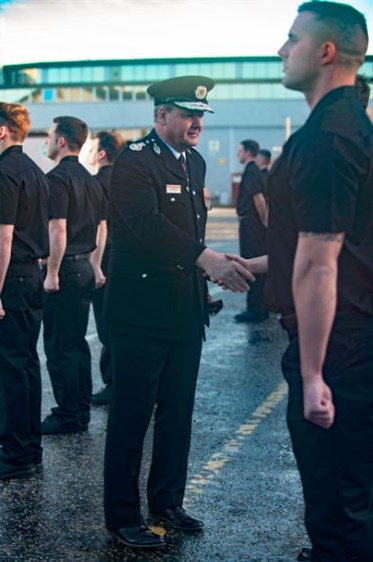 The Scottish Fire and Rescue Service today welcomed more than 20 new firefighters to its ranks – in the last ceremony to take place at the historic Thornton training facility in Fife.

This was the final graduation ceremony to be held at the Thornton training centre before its closure in March 2019, and the completion of the new, state-of-the-art training hub at Newbridge in Edinburgh.

A total of 23 trainee firefighters were formally welcomed to SFRS by Chief Officer Alasdair Hay, and Chair of the SFRS Board, Dr Kirsty Darwent.

At the event on Friday, December 14, the new recruits were given the opportunity to showcase their rescue skills in front of proud friends, families, and senior officers following 14 weeks of gruelling training.

Chief Officer Hay said: “Make no mistake, these graduates are exceptional and among the most hardworking and committed of individuals – and it is an honour to welcome them to the UK’s largest fire and rescue service.

“Today has been a very special day, not only for our graduates, but for their families.

“This facility in Thornton has been at the heart of fire and rescue training since the 1970s, and has helped shape and mould Scotland’s firefighters for more than four decades.

“There is no doubt that this has been an especially poignant occasion for the Scottish Fire and Rescue Service, being the last formal graduation ceremony in Thornton before we move into our fantastic new training facility at Newbridge.”

Yesterday, 23 recruits based in Portlethen near Aberdeen also received their scrolls, followed by 57 at the National Training Centre in Cambuslang next week.

This means an overall total of 103 trainees are now preparing to stand on the frontline to protect Scotland’s communities from next week.

Chief Officer Hay added: “These exceptional individuals proved they have the ability, skill and determination across a gruelling 14-week schedule, which has trained and equipped them to take on a crucial role at the forefront of the modern fire and rescue service in Scotland.

“Being a firefighter is an extremely rewarding job and in my opinion the best job in the world – I hope it will also be a long and successful career for them as it has been for me.”