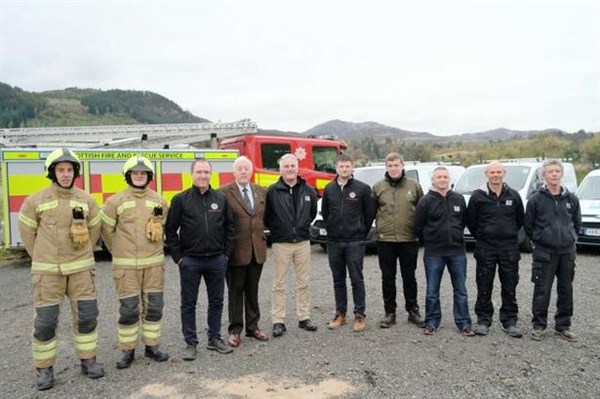 Staff at a Highland Perthshire business have been hailed as incredible role models with the skills to save lives.

Pitlochry-based RW Bell Electrical now supports seven retained firefighters, who have been given the green light to down tools and respond to pager alerts.

“We rely heavily on organisations, companies and managers who are in a position to release staff to be available round the clock every day of the year, to jump on a fire appliance and serve their community.

“The 13-strong Pitlochry team are the first responders at the scene of a call out, whether it is to a major blaze like Fisher’s Hotel on Hogmanay, wildfires or, sadly all too often, serious accidents on the A9.
“Around 80 per cent of Scotland’s stations are staffed by retained personnel and volunteers.

“We simply couldn’t do without them and supportive companies like RW Bell.

“It is really all about supporting your local community.”

The Pitlochry firm’s ties to the fire service date back to 1962, when co-founding director Norrie West first signed up.

“We have always been supportive and we actively encourage staff to get involved,” said RW Bell managing director Steve Carruthers, whose son Greg is crew manager.

“There are spin-off benefits in terms of discipline and professionalism, and career and personal development.

“But primarily we regard it as a vital community asset because Pitlochry is the furthest north fire station in Perth and Kinross, with the next one at Kingussie.

“The retained fire service is crucial in this area and highly valued.

“Our head office is only a few hundred yards from the town’s fire station so that can be handy.

“And if the lads are out on a job when the pager goes off they can react swiftly after taking care of their health and safety requirements in the workplace.”
The latest recruits, joiner Stuart Jamieson and electrician Struan Matchett, recently completed a two- week basic training block, joining colleagues Greg and his fellow director Alan Smith (watch manager), joinery manager Malcolm Campbell, Pitlochry Golf Course greenkeeper Dougie Black and joinery foreman Eddie Clark, who serves with the Blairgowrie crew.

Station manager Stroud - who can be contacted for further information on 01738 622226 - said the service was actively recruiting retained and volunteer firefighters for stations across Perth and Kinross.