Firefighters joined forces with partners at the weekend to rescue a horse that had wedged itself inside a transport van. 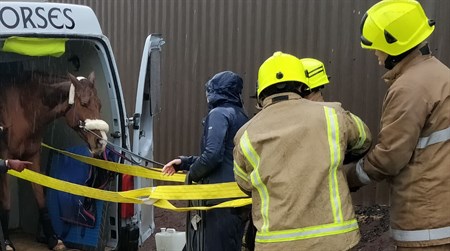 The stricken mare became stuck after negotiating her body through a small gap inside the vehicle leaving her unable to lift her legs clear.

Crews from Dalkeith and a specialist heavy rescue unit from Sighthill in Edinburgh were mobilised to the stables in the Pathhead area of Midlothian at 9.59am on Saturday, October 13.

The SFRS will step in where required to prevent members of the public putting themselves at risk – especially where it involves a large animal that requires to be rescued using specialist skills and technical expertise. 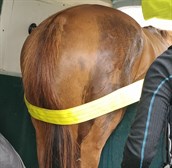 Crews used their knowledge to work safely around the horse’s potentially dangerous rear legs in a tight space, securing strops around her rear end and attempting to take the weight off of her midriff which was resting on a narrow divide – potentially cutting off circulation.

And working with the owner and a vet, quick thinking crews came up with an ingenious solution to free the mare.

Station Manager Steven Scott said: “This was actually a particularly tricky incident for the crews and we took a lot of learnings away from it.

“The situation the horse was in was an unusual one - the front of the horse was out the back of the vehicle, while its rear legs were stuck inside.

“The crews tried quite a few more conventional methods – tugging with animal strops, gently trying to coax the animal to free herself using advice from the owners and vets – but it was unsuccessful.”

Firefighters even placed a protective covering on the ceiling of the van to prevent the animal bumping its head.

SM Scott added: “We had to work carefully, and very closely with the vets and owners, to make sure the horse was calm and we weren’t putting ourselves or anyone else in harm’s way.”

Firefighters and vets came up with a unique solution to the challenge, using wooden pallets to create a temporary support for the horse’s legs and lifting her weight – allowing her to free herself. 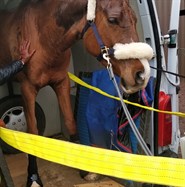 He continued: “This was a great result from a tricky situation and it was good to see the horse appeared to be unharmed.

“The teams worked really well with the knowledge and experience that they have to bring this to a safe conclusion.

“My thanks goes to the crews as well as the owners and vets for their assistance.”

SM Scott added: “While the statutory responsibility for animal rescue lies with the Scottish SPCA, we will always attend where there is a risk that a member of the public might put themselves in danger by attempting to effect their own rescue.

“By nature the SFRS is also a humanitarian service and would always seek to assist an animal in distress, which can be a source of upset to members of the public.”

Anyone who discovers an injured or distressed animal should call the Scottish SPCA Animal Helpline on 03000 999 999.