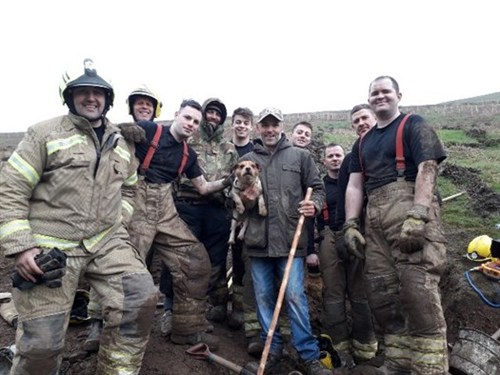 Firefighters were on hand to rescue a terrified terrier which had got itself stuck down a rabbit hole in East Dunbartonshire last weekend.

Despite their best efforts, Kevin and his worried family were unable to rescue Hook and called the Scottish Fire and Rescue Service for help.

Firefighters spent hours digging through several tonnes of dirt, and used a specialist telescopic camera to finally locate Hook and reunite the lucky pooch with his relieved family.

Station Manager Brian Byrne explained: “It was a great feeling to be able to reunite Hook with his owner.

“Our firefighters worked tirelessly as a team, using state-of-the-art specialist equipment as well as manually digging what probably amounted to as much as five tonnes of soil and stones.

“In what was a physically demanding task, our crews showed extreme professionalism and compassion throughout, and showed exactly what being a firefighter means.”

SM Byrne added: “It’s incidents like this that show how our staff will go above and beyond, in order to provide a service which is second to none.”

Stephen Cobain, brother-in-law of Hook’s owner Kevin, said: “When Hook was rescued we all felt such a relief.

“We took him to the vet for a check-up and he’s totally fine – he’s now jumping about as if nothing happened.

“It was a tough and emotional few days, but the firefighters did such a fantastic job.

“A huge thank you to them from all of our family.”

But, this was not the first time firefighters have been called to this type of rescue.

Late last year crews saved a dog which had gotten itself in the same predicament close to a leisure centre in Linlithgow.

Crews were also on hand at another unusual animal incident in December 2018 when a rhino got stuck in a tyre swing.

Qabid was playing in his enclosure at Edinburgh Zoo when he managed to wedge his leg and neck in the tyre.

After he was sedated crews used cutting gear to free the large animal.