Firefighter helps defy the odds and claim Gold for Scotland 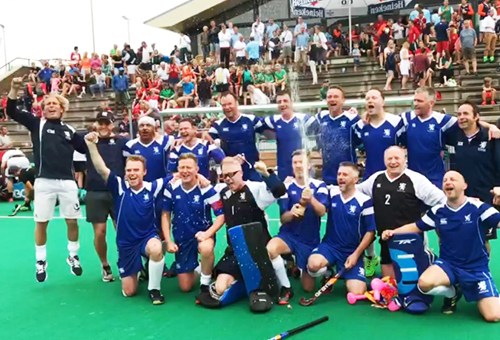 Chris and his international teammates

A firefighter has made history by defying the odds and helping Scotland claim gold in an international hockey contest.

Chris, who became a firefighter in 1996, recently returned from the over-45s European Cup in Rotterdam, where he was part of a Scotland side who stunned their continental rivals by winning gold.

Up against nations with access to far greater resources, few expected Scotland to compete.

However, an admirable team spirit and drive to succeed saw Chris and his teammates make history – defeating their Dutch hosts and rivals England along the way.

Chris revealed: “We’ve been back about two weeks now, but the whole feeling is still surreal. It’s amazing.

“In the seconds after the full-time whistle against England, once we knew we’d won gold, we couldn’t comprehend what had been achieved.

“We have loads of Whatsapp pictures and videos which will always act as a brilliant reminder.

“We were able to spend 15 minutes celebrating with family and friends and were then taken inside for the medal ceremony.

“The Dutch and German players could have felt aggrieved not to have won, but they celebrated with us and had a drink with us.

“We sang Flower of Scotland and the organisers played the Proclaimers and other Scottish songs, it was brilliant.”

The team captain continued: “It was a definitely a shock, us winning gold.

“Holland take hockey very seriously. Hockey is second only to football in Holland and they were considered as the pretournament favourites.

“We beat them, but they went unbeaten during the rest of the tournament.

“Scotland just being there to compete is unheard of, so us actually winning is a real surprise.”

Having previously competed and lost, the team were determined this time would be different.

Chris explained: “The whole ethos of the team changed. We had been to tournaments before, but this time we decided to be more confident in our abilities and demanded more from each other.

“We have some very good players, but everyone was for the team first and foremost

“It was a real heatwave in Holland – 35 and 40 degrees when we played.

“Ten minutes in you felt like you couldn’t breathe even though you weren’t tired. But, despite that, everyone fought to the final whistle.”

Chris and his teammates are now hoping to compete in the World Cup in South Africa next year.

However, with players having to fund much of their trip and take time off work, just getting to South Africa presents a challenge.

The experienced firefighter said: “It can be very difficult for people to fund flights, accommodation and get the necessary time off work - I do have access to a Local Authority Athlete Award, through Angus Council, which certainly helps.

“But, of course, we want to be there competing.

“At the moment we’re considering what we can do next and if we can enter a team. Hopefully our success in Holland can help promote the team and show what we can achieve.”