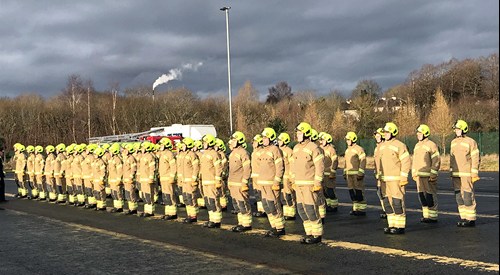 The Scottish Fire and Rescue Service today welcomed the latest additions to its firefighter ranks.

Fifty seven recruits graduated in front of proud family and friends during an emotional ceremony at the SFRS Headquarters in Cambuslang.

The delighted graduates were lauded by SFRS Chief Officer Martin Blunden before displaying a series of drills, showcasing what they’d learned during a gruelling 14-week training course.

Paying tribute to the commitment of Scotland’s new firefighters, Chief Officer Blunden said: “It fills me with immense pride to see these men and women graduate in front of their loved ones.

“Being here today means they have successfully completed an intense three-month training programme, which will have tested them both physically and mentally.

“This training regime is designed to ensure we have the very best people wearing the Scottish Fire and Rescue Service crest while protecting Scotland’s communities, so each and every one of today’s graduates has earned the right to hold their head high.”

Chief Officer Blunden added: “There is no doubt that this is an exciting time to be joining the Scottish Fire and Rescue Service, as we seek to broaden the role of firefighters to protect communities from new and emerging risks.

“Indeed, in the days, months and years to come, these men and women will play a vital role in helping to keep their communities safe.

“But, for now, I’d like to once again pass on my congratulations to all of our trainees and welcome them to theScottish Fire and Rescue Service family.

“Today is the fourth, and final, graduation ceremony of 2019.

“This year has seen 170 graduates join up with firefighter crews across Scotland.

“May I take this opportunity to wish each and everyone of them the very best as they continue their careers with the Scottish Fire and Rescue Service.”

The recruits applied after the Service launched its ‘Break the Mould’ campaign in April. It saw the overall number of applicants rise by almost 25 per cent - from 4,373 previously to a total of 6,075.

And this included 771 applications from women - compared to just 360 previously. More applications were also submitted by the LGBTQ+ and ethnic communities.

The 57 firefighters who graduated from the SFRS Headquarters are:

Meanwhile, the Scottish Fire and Rescue Service continues to recruit for retained and volunteer firefighters across Scotland, as well as positions for support staff.

For more information on our current vacancies.