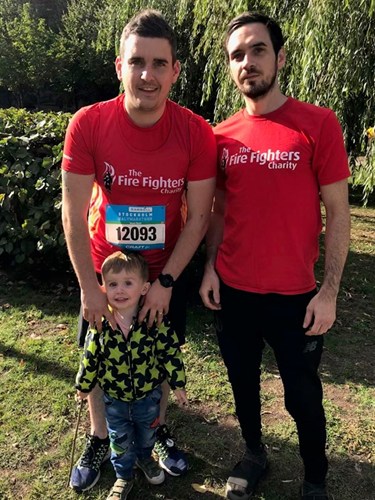 Sean (L) is pictured with his son Cael and his brother Dec.

A Scottish firefighter is preparing to run his first ever marathon and admits the prospect “gi’es him the fear!”

Sean Stutt is gearing up for the London Marathon on Sunday, April 28 in aid of The Fire Fighters Charity.

The Scottish Fire and Rescue Service retained firefighter from Bathgate fire station is taking on the challenge to help raise money for the invaluable work the charity does for firefighters and their families.

And, despite being ribbed by his crewmates for his choice of runwear, Sean can’t wait to begin his charity challenge.

He revealed: “This is my first marathon ever and I always said if I did a marathon it would have to be London – but it gi’es me the fear!

“There were only 15 places on offer and I managed to get one – I was delighted.

“I am the only Scottish firefighter so I am definitely feeling the pressure, but it’s nice to represent our Service.

“I run home from work with my leggings on and I get a bit of a ribbing from my workmates but they did help me with my fundraising so I can take it.”

While the race itself doesn’t take place until April, Sean has already doubled his initial fundraising target of £2000.

He was inspired to raise funds for the charity after his uncle, who is also a firefighter, was aided back to work following an ankle break.

With a number of half marathons under his belt, Sean has a 17 week plan in the run up to the big event.

Reflecting on his challenge ahead, Sean said: “It’s hard with a young family and on-call to squeeze the training in but my family and workmates have been so supportive.

“I have a few friends that have completed marathons in crazy times and everyone raves about the atmosphere.

“I try and go out four times a week – I have the dogs for training partners though they do their own thing.

“My wife, kids and parents are all coming down to support me on the day. “

He added: “The Fire Fighters Charity relies on fundraising and donations each year to deliver the invaluable support and services it has - and I appreciate every penny that is donated.”

The Fire Fighters Charity is almost entirely funded through donations from the fire community and public. Whether injured, ill or in need of psychological support they exist to support the everyday heroes of the UK fire community.

The Fire Fighters Charity supports thousands of beneficiaries a year through a broad range of services including rehabilitation at one of their centres.

For more information on The Fire Fighters Charity visit - https://www.firefighterscharity.org.uk/