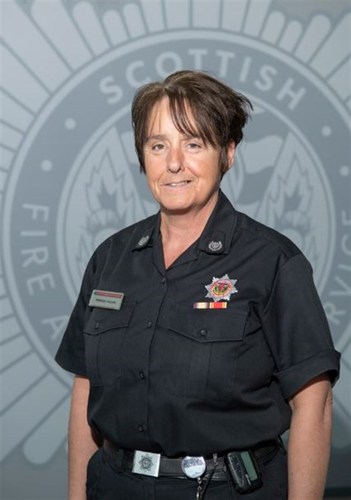 A dedicated Control firefighter has received royal recognition for her commitment to protecting communities.

Brenda Gillan, a Group Manager for Control for the Scottish Fire and Rescue Service, has been awarded the Queen’s Fire Service Medal (QFSM).

She was recognised in the New Year Honours list for her efforts for over 25 years keeping people safe by managing the Firefighter Control operators who are the calming voice over the telephone in sometimes devastating circumstances.

A delighted and proud Brenda said: “Being nominated for the QFSM is a deeply proud, albeit humbling experience.

“This award has only truly been possible due to the commitment and hard work of Operational Control Teams across the country who are a small but a critical part of the Scottish Fire and Rescue Service and I will accept this award on behalf of all of us at Operations Control.”

Brenda, who serves as part of the Scottish Fire and Rescue Service’s outstanding Operations Control team handles emergency calls from the public and co-ordinates an effective emergency response to keep people safe.

She is based at Operations Control for the West in Johnstone and is the Group Manager responsible for Service Delivery across the three operational control rooms in the Scottish Fire and Rescue Service.

After joining Strathclyde Fire Brigade in 1992 as a Fire Control Operator on Red Watch, Brenda worked through various ranks on different watches and in 2007 was promoted to Group Manager.

Before joining the fire service Brenda spent 15 years in the Royal Army Medical Corp attaining the rank of sergeant – and served during the first Iraq invasion of Kuwait in 1991.

Libby Logan is the Scottish Fire and Rescue Service’s Area Manager for Command and Control.

She said: “I am obviously absolutely delighted for Brenda, so very well deserved.

“She is an asset to our OC team and I am pleased that the work carried out by OC personnel continues to be recognised.”