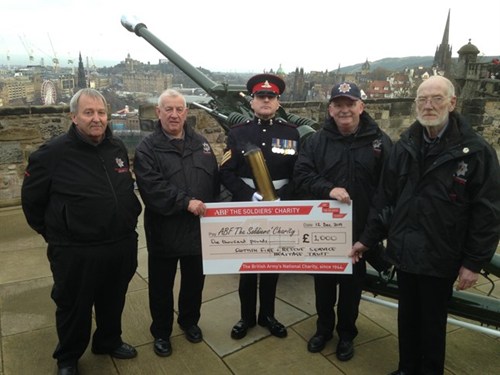 Dedicated volunteers from the Scottish Fire and Rescue Service were recently invited to Scotland’s Capital City to present a cheque to the Soldiers Charity.

The funds -worth £1000 – were raised at a recent Gala Concert in Greenock which  featured the Band of the Royal Regiment of Scotland.

They group of volunteers were also invited as Guests of Honour to see the iconic firing of the One O’clock gun and had lunch behind the scenes in the historic castle.

Dave Adam, the Chair of the SFRS Heritage Trust said: “Being invited to the castle was a huge honour.

“When we first started the Heritage Trust in 2013 we wanted to get off to the best possible start by supporting those who protect our country.

“To do this we arranged for the Band of the Royal Regiment of Scotland to play at one of our charity concerts in Greenock.

“Originally it was planned to be a one off event but, it’s been so successful we now host the concert annually.”

Over the years the Heritage Trust has raised over £6000 for the Soldiers Charity and has members across Scotland as far as Dornoch.

Attending over 100+ public events a year the group of volunteers showcase historic firefighting equipment and vintage fire engines which they have helped preserve and restore.

This year, the band of the Royal Regiment of Scotland will return to Greenock for the annual gala concert on Friday, March 22, 2019 at the Beacon Arts Centre.

Find out more about the SFRS Heritage Trust here: www.sfrheritagetrust.org