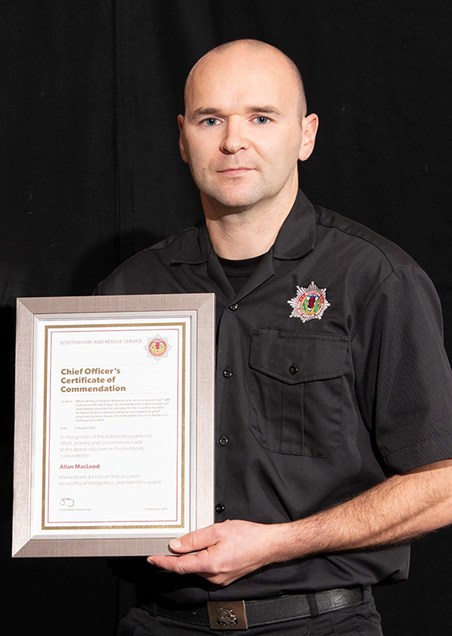 AN off-duty retained firefighter who was first on the scene at a tragic car crash on the Isle of Skye has been nominated for a national award.

Allan MacLeod, 39, was travelling between jobs on the island when he came across the accident on Wednesday, August 8 2018.

The four-vehicle collision on the A87 sadly claimed the life of 54-year-old Ewen MacKay from Teangue as his son Padraig, 16, was left trapped and seriously injured.

Now he has been nominated by the readers of the Sunday Mail newspaper for the Scotland’s Champion award, under the Armed Forces and Emergency Services category, for his actions. The dad-of-two quickly identified Padraig as being in critical need of first aid, and marshalled members of the public to help remove him from the vehicle and stabilise him – ensuring he could be airlifted to a Glasgow hospital for emergency treatment.

Allan will be amongst 16 nominees across multiple categories who attend the black-tie awards ceremony at the Double-Tree by Hilton Glasgow Central Hotel on June 22.

The professional painter and decorator was previously honoured by former Scottish Fire and Rescue Service Chief Officer Alasdair Hay for his professionalism in September 2018.

Allan has said the latest nomination comes as a shock, but once again took the opportunity to pay personal tribute to the bravery of teenager Padraig.

He said: “I am incredibly humbled to be nominated for this award – it was completely out of the blue and unexpected and my sincere thanks goes to those who nominated me.

“But my thoughts are still with Ewen and his family, and Padraig – people might say that we gave the lad, Padraig, a chance but he took that chance himself - and he fought through.”

Allan continued: “I wasn’t the closest person to the crash but I was the first one to get out and start checking on people. It wasn’t a good situation – I knew straight away what we were dealing with.

“I marshalled people to help me and taught some basic first aid – but it quickly became apparent that a young man in the van was my main priority.

“Together we had to get him out of the van, stabilise him and comfort him too while the crews and ambulance were on their way.”

Padraig had been traveling in his dad Ewen’s van when the collision occurred. He was later airlifted 230 miles to the Queen Elizabeth University Hospital in Glasgow. Ewen, a joiner, sadly passed away in the accident.

Allan has continued to keep in touch with the family of Ewan and Padraig and met with them in the months after the accident.

He continued: “I’ve been keeping in touch with the family for updates on Padraig and I am so glad to hear he is making good progress.”

Allan - who lives with his wife Joanna, daughter Lexy, aged 12 and son Lachlann, aged 8 - is a retained firefighter with almost 20 years’ service, based at Staffin Community Fire Station on Skye.

He continued: “The communities up here look out for each other; everyone knows who’s who on the island and there’s always mutual friends or family.

“Being a retained firefighter is something unique – and I believe any one of them would have done the same thing as me if they came across that accident.

“We are trained for this, and that does not go away when you are off duty – the firefighter in you is always there.”

Kenny MacKay is Ewen’s brother. He previously said: “My brother was a devoted father, a loving husband and a friend to many.

“We cannot begin to describe our loss and heartbreak, after he was taken from us too soon.

“Our heartfelt thanks goes out to all of the emergency services who attended that day, including Allan, who we know did everything in his power to help Ewen and Padraig.

“We are gladdened to hear he is being recognised for his actions.”

David Farries is the Deputy Assistant Chief Officer for the North of Scotland.

He said: “Our thoughts remain very firmly with the family of Ewen MacKay who have suffered the most terrible loss and with the wider community. Wehope that Padraig continues to make a full recovery.

“Allan’s actions not only ensured that this young man was quickly removed from a dangerous situation to receive the treatment he needed, but also that the crews who arrived at the scene had a full appraisal of the situation and knew exactly what needed to be done.

“My congratulations go to Allan for this much deserved nomination.”