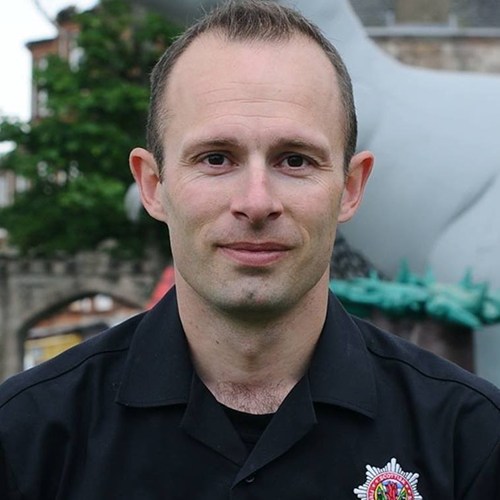 A retained firefighter has told how he followed in his family’s footsteps by working to protect his island community.

Scott Watson has served with the Scottish Fire and Rescue Service’s RDS ranks on the Isle of Cumbrae for the past five years.

The former RAF computer analyst grew up on Cumbrae with both of his grandfathers working as RDS firefighters.

After a decade with the RAF, the lure of following his grandparents into firefighter life proved too strong for Scott to resist.

He explained: “When I first joined the station, everyone there had worked with one of my grandads.

“From that side of things, carrying on that tradition was very important to me.”

Scott continued: “The thing about Millport is that everyone knows each other.

“When the pager goes and you respond to a shout, you’re not going to help a stranger; you’re going to help a family member, a friend or a workmate. It’s a very close community.

“It’s vital that we maintain a presence on the island because when the ferries go off at night or through bad weather, we’re on our own.

“That’s why we work closely with the police, ambulance service and Coastguard who are all on the island.”

David, who also serves as a wholetime firefighter in East Renfrewshire, Renfrewshire and Inverclyde, was in-part inspired to join the fire service after witnessing the emergency response to one of the biggest and notable fires on Cumbrae in recent years.

Watch Manager Bryceland revealed: “I remember the fire we had at the Garrison building in 2001, which had eight engines in attendance.

“The Garrison is one of the most notable buildings right in the centre of Cumbrae and is very popular with the community.

“I remember witnessing that fire and thinking that I could do something to help the community – that’s when I began to consider becoming a retained firefighter.”

With the SFRS now looking to recruit more retained firefighters on Cumbrae, Watch Manager Bryceland is appealing for more local people to step up and help protect their community.

He said: “This is a great opportunity to learn new skills and to help your community.

“We’re looking to speak with anyone who lives on the island and who feels they have the skills and expertise to make a difference as a retained firefighter.

“With the role of the firefighter expanding, we are responding to a greater range of incidents.

“During the past year we have responded to building collapses, water rescues, animal rescues and, of course, fires.

“I would appeal to everyone to consider a career as a retained firefighter.”

The island’s fire station is hosting an open day event to provide information to potential recruits today between 3pm and 6pm.

For more on what it takes to become a retained firefighter visit www.myjobscotland.gov.uk/emergency-services/scottish-fire-and-rescue-service/retained-firefighters