Around 20 firefighters remain at the scene following a building fire in Glasgow as crews continue an extensive dampening down operation. 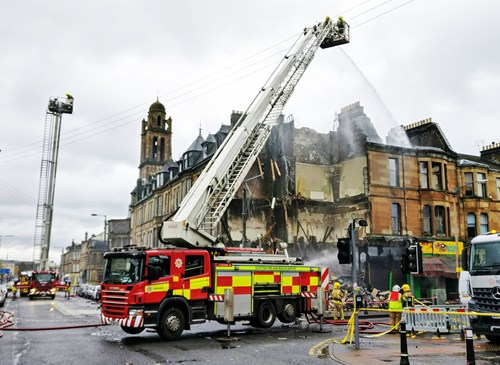 The Scottish Fire and Rescue Service was first alerted at 11.31pm on Sunday, November 10 to reports of a fire at Albert Drive in Pollokshields.

At its height, around 60 firefighters, nine fire appliances and two height appliances were mobilised to the area.

Currently, five fire appliances and one height appliance remain at the scene.

The fire had initially taken hold within a commercial premises and thereafter affected a number of dwelling flats above.

Residents were evacuated, and one person was taken to hospital suffering the effects of smoke inhalation. There were no reports of further casualties.

Crews worked through the night to contain and extinguish the fire which, due to its severity, caused a partial collapse of the building.

“Firstly, I would like to thank our crews for their efforts – working in difficult conditions throughout the night – in bringing this fire under control.

“I would also like to thank the community for their patience and support throughout the incident, and recognise the hard work put in by our partners, other emergency services and the local authority.

“The Scottish Fire and Rescue Service will continue to work alongside our Police Scotland colleagues to establish the full facts and circumstances of the fire.”