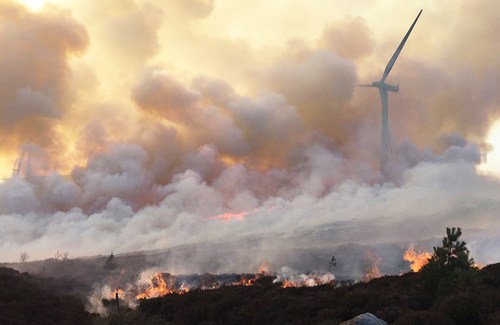 A £10,000 donation has been made to The Fire Fighters Charity after crews from across Aberdeenshire, Moray and Highland worked for days to tackle a wildfire earlier this year.

Scottish Fire and Rescue Service crews were mobilised in April, 2019, to reports of grass fire near Aberlour, Moray.

At its height around 80 firefighters, two helicopters, 19 appliances and multiple specialist resources were in attendance.

The wildfire was brought under control, narrowly avoiding the nearby Paul’s Hill Wind Farm, owned by Fred Olsen Renewables, which has several turbines and buildings across the site.

Bruce Milne, SFRS Station Commander at Elgin Fire Station, said: “It was a very demanding task to bring this wildfire under control in such a remote area.

“We mobilised a large number of resources from across the region, including crews of retained firefighters, who respond to emergencies while juggling other commitments including primary employment.

“Our highly-skilled crews were relentless in their efforts and we’re heartened that this donation will go towards such a worthy cause.”

The generous donation from Fred Olsen Renewables is in recognition of the huge efforts of the firefighters involved in safeguarding the wind farm.

Stuart Naylor, Operations Manager from Fred Olsen Renewables, said: “We are extremely grateful to the fire service and all those individuals involved in attending and controlling the wildfire near Aberlour earlier in the year. Without such professionalism and bravery, the situation could have been much worse. This donation reinforces our gratitude, and we hope the funds can be used to make a real and positive difference to those concerned.”

The Fire Fighters Charity, which was set up 76 years ago during the Second World War, will allocate the funds towards their existing programmes that provide support to crews around mental health, physical health and social wellbeing.

Natasha Mason from The Fire Fighters Charity, who is delighted to receive the donation, said: “The charity offers specialist lifelong support for members of the UK Fire Services community, serving and retired, empowering individuals to achieve mental, physical and social wellbeing throughout their lives. This donation will go a long way in supporting our beneficiaries.”