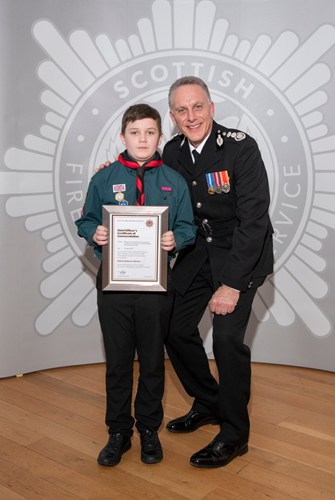 A schoolboy who helped his grandad to safety after he slipped on rocks has been awarded a Chief Officer’s Commendation by the Scottish Fire and Rescue Service.

Nathan Anderson-Moores, from Tameside in Greater Manchester, was visiting family in the Scottish Borders in August when grandad Phillip Blanchard fell and broke his leg on a remote seafront path, near Eyemouth.

The 11-year-old ran to call a relative to dial 999 – sparking a huge multi-agency operation – before returning to comfort his stricken grandad, and guiding emergency service crews to their location.

Firefighters worked alongside Coastguard and Lifeboat colleagues to rescue Phillip, and he was transported to Edinburgh Royal Infirmary for surgery on a fractured leg.

Nathan was welcomed for a tour of Eyemouth Community Fire Station after his heroics, and SFRS Chief Officer Martin Blunden praised the youngster for his “brave and mature” actions.

Speaking at an SFRS recognition ceremony in Linlithgow Burgh Halls, Chief Officer Blunden said: “Nathan showed great calmness – not only in challenging circumstances, but in a new and remote environment – to alert the emergency services, and help our crews and colleagues to locate him and his grandad, Phillip.

“This is a fitting award that recognises the brave and mature actions of Nathan. He is a fantastic young man, and I am delighted to present him with this Commendation.” 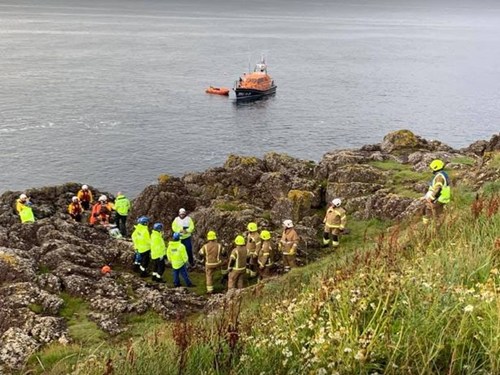 Nathan was joined at Linlithgow Burgh Halls by mum Joanne, dad Dave and grandad Phillip. His mum spoke of the family’s incredible pride of the youngster’s commendation award.

Ms Moores said: “I can’t thank everyone enough for how brilliant they’ve been with Nathan – he was over the moon to receive the commendation. It is framed and will sit pride of place back home.

“Nathan was a little nervous beforehand, but he was immediately put at ease when everyone came over to shake his hand.

“We went back to Eyemouth after, and met the rescue teams, which again was a very special experience for him. It’s something he’ll never forget.”