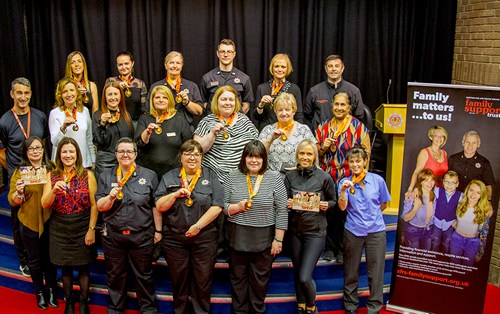 MORE than 180 people have completed a staggering 14,400-plus miles in aid of firefighters and their families – in just one month.

StepTember was created by the Scottish Fire and Rescue Service’s Family Support Trust and is a challenge that can be run, walked or completed by a large group of participants – and by any means necessary.

This year’s inaugural event challenged entrants to complete either 26, 50 or 100-mile journeys within the 30 days of September.

And latest figures reveal that over 14,400 miles have been completed – a distance that would (approximately) take the average person 201,628 days to walk.

That is 2,500 times as tall as Mount Everest and twice the distance between Edinburgh and Buenos Aires, Argentina.

The tenacious trekkers even dreamt up some unusual ways to complete their miles.

Group Manager Andy Watt took on the West Highland Way while Grace Quigley cycled 300km on the Camino between Spain and Portugal.

And ICT Project Manager Javier Larios has run over 126 miles, cycled over 208 miles and swam over 4 miles in open water over the course of September – smashing the target.

Martin Blunden, Chief Officer of the SFRS, has also been taking part in the StepTember challenge.

He said: “This event has been fantastic at bringing our Fire Service family together.

“It has encouraged so many people to be more active and really has had a fantastic effect on people’s health and wellbeing.

Delighted to do 3.3miles today in my penultimate #Steptember event. 7.9miles to do early doors tmw, finishing with a bang #WhatAGreatMonth

“I’ve seen people with so many interesting ways of completing their own miles and it’s been really pleasing to see so many taking part.

“I’m proud of everyone who has managed to complete their goals - and make a real effort to raise funds for this most worthwhile charity.”

Garry Mackay is a trustee of the SFRS Family Support Trust.

He said: “It has been an incredible turnout and we’ve really been overwhelmed with how many people have signed up to StepTember.

“This is the first event and it certainly won’t be the last, we want to thank everyone for signing up.

Week 1 of @sfrs_fst #Steptember complete and 40 miles in the bank, half of those were done waaaaaay too early 😑 💤 this morning. Ran from the heart of our brilliant City out to @fire_scot HQ and back. Thanks to everyone who has supported this brilliant initiative so far! 🏃‍♂️ 🏃‍♀️ pic.twitter.com/Ddr80ljD2s

“There will be even more places available next year and we are looking forward to see everyone’s different ways of completing their challenge.

“Everyone who registered will receive a medal for participating and it will be a real proud moment for our charity to send out these.”

Last year SFRS FST helped over 1,000 fire service families! This year we will continue to help our family and each and every one of you have played a massive part in that 👏👏👏. To everyone who participated in #StepTember you made a difference and you should be proud, thanks 💕 pic.twitter.com/9Vrb3Semyp

The Family Support Trust exists for the benefit of Fire Service personnel as well as retired members and their families.

Find out more about the work of the Family Support Trust.