A firefighter has been honoured after marking his incredible 40 years on the frontline. 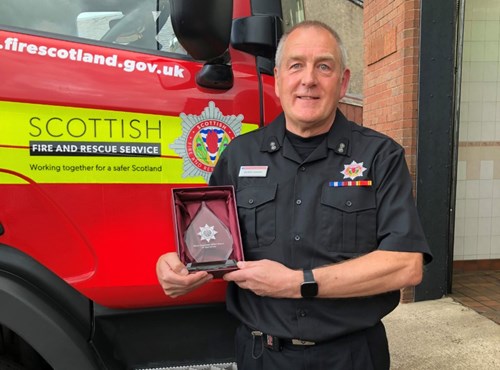 Gilbert ‘Gibby’ Rowan joined the ranks as a retained firefighter at Larkhall Community Fire Station in 1980, and has served as Watch Commander since 2001.

Over four decades he has balanced his role protecting his community as a firefighter, with family life and his primary job as mechanical engineer with Rolls Royce.

Retained firefighters such as Gibby respond to emergencies via an on-call pager system, turning out to a range of incidents such as fires and road traffic collisions.

He was joined by family and colleagues last week at the station’s weekly Thursday drill night for a socially distanced celebration to mark his milestone anniversary.

Gibby said: “I’m fortunate enough to provide a valuable public service to the people of Larkhall, and quite simply I love what I do.

“I can’t believe it’s been four decades, and I’m very proud to have reached this point.

“Yes, there have been significant changes over the years – but what has not changed is the desire to help people.

“It’s vitally important to ensure the fire and rescue service remains at the heart of the community, and ready to respond when needed most.”

Gibby added: “My wife Jackie and son Fraser have given me such wonderful support over the years.

“I’d like to thank them for their patience and understanding, as being a retained firefighter also has an impact on their lives.

“They are the predictable support during unpredictable circumstances.”

Area Commander Fairbairn said: “Watch Commander Rowan is a credit to the retained service, to his team at Larkhall, and to the Scottish Fire and Rescue Service.

“His 40-year service has seen him attend thousands of incidents and has been at the centre of some of South Lanarkshire’s most notable fires, road traffic accidents and special services.

“Four decades of dedicated public service is a significant milestone in Watch Commander Rowan’s career, particularly within the fire and rescue service given the nature of what we do.

“He has undoubtedly seen many changes during his time at Larkhall and within South Lanarkshire, but one thing that hasn’t waned is his commitment keeping others safe, and giving back to his community.”