Firefighter laces up for hospital fundraiser after recovering from COVID-19

Just a few weeks ago, Flora Johnston could barely empty the bins without gasping for breath after contracting COVID-19. 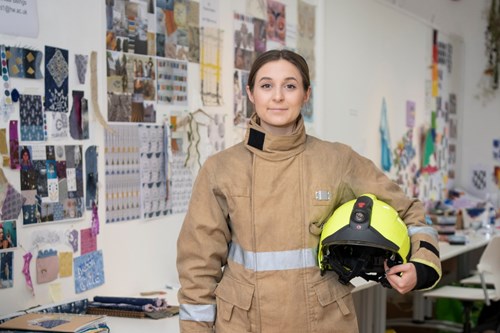 The super-fit firefighter and fashion student, 22, was advised by doctors to stay at home in isolation for almost four weeks with the virus.

Flora is now fully recovered, has returned to the frontline alongside her crewmates at Galashiels Community Fire Station – and is lacing up her running shoes for an epic charity challenge this month.

She is running the 11.2km distance from her front door to the entrance of Borders General Hospital every day throughout May – a total of more than 200 miles.

“I first began to show symptoms of COVID at the end of March, and followed the advice to stay at home and completely self-isolate,” Flora explained.

“I got progressively worse, and had a few pretty bad days, so I called the NHS 111 helpline. 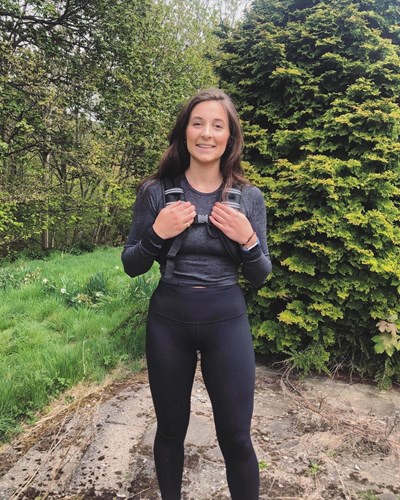 “As I was still able to breathe well enough by myself, I was told not to go hospital, and instead continued to speak regularly with NHS nurses and doctors at the BGH.

“I had a mixture of bad fevers and a tightness in my chest, would wake up completely exhausted, and even the smallest thing such as taking rubbish out to the bin was a real struggle without stopping to catch my breath.

“In the end, I waited it out over 26 long days at home by myself.

“I couldn’t go near the fire station, and with my family on the other end of the country and my flat mate having moved away from Gala after university, it was a tough few weeks.

“It was definitely a frightening experience, and one I’m glad to put behind me.

“But I was overwhelmed by the support I received – from the NHS 111 nurses and doctors at the BGH, the guys at the station who’d check on me, and my ‘Borders family’ down here who reached out.”

Flora’s charity challenge also comes after she was treated at the Melrose-based hospital for a fractured elbow and concussion following a bad cycling accident last summer, when she was knocked off her bike on the way to firefighter training.

She continued: “Last summer, I also ended up in A&E at the BGH after I fractured my elbow when I was knocked off my bike, and was there frequently to see neurologists with post-concussion syndrome afterwards.

“The care I received was brilliant, and I was so well looked after both then and in these recent weeks and months.

“I am also lucky enough to often work closely with our other emergency services in my role with the fire service, and I see how incredibly committed our frontline workers are to helping others.

“Now I want to give back to my local community, and support both patients and staff at the BGH, as they have done so for me.”

Elgin-born Flora is raising money for ‘Friends of the Borders General Hospital’ charity – which funds vital equipment and services at the region’s largest hospital – and smashed her initial target in just a few days.

“In total, this will equal a distance of 347.2km over the course of the month – whilst conforming to the lockdown rules, of course,” Flora added. 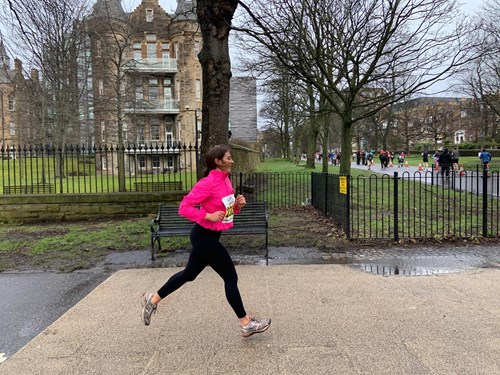 “I initially wanted to try and raise £200 over the course of May, but this was over £500 after only four days – people have been so generous.

“Running just shy of 350km in total will be a challenge, I have no doubt about that.

“I’ve always been a keen runner, and was meant to be running the Edinburgh 10km later this month, but this will be something else entirely.

“But I feel lucky to be recovered now, and this this will keep me motivated during this difficult time while being able to support a brilliant local charity.”

Originally from the Highlands, Flora moved across the country in 2016 for university, and joined the Scottish Fire and Rescue Service as a retained firefighter two years later.

Retained firefighters such as Flora respond to emergencies via an on-call pager system, turning out to a range of incidents such as fires and road traffic collisions.

While on-call crews such as Flora’s normally train together once a week, retained crews are currently observing social distancing rules amid the coronavirus pandemic.

“I joined as a firefighter two years ago, and I am delighted that I’ve been accepted to start my post-grad here in Galashiels as it means I can continue with the service,” she said.

“I absolutely love being a on-call firefighter, and being able to balance this hugely rewarding and exciting role with my degree. 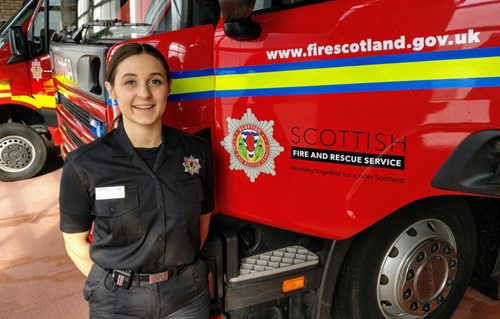 “I remember when I first told friends and the university and a few eyebrows were raised, because I think there was a worry that I would get distracted, or it would affect my grades.

“But I’ve always been a motivated student, I pull my weight, and I know that the more I put in, the more I get out – so I wasn’t worried.

“Galashiels is a relatively busy station, and yes it can be scary and challenging at times, but we have the nicest team and everyone looks out for one another. I feel like I’ve got ten new dads sometimes!

“You definitely have to be committed to the role while managing your time carefully, especially around exams – but it’s been one of the greatest experiences of my life.”

Area Commander Stephen Gourlay, the Scottish Fire and Rescue Service’s Local Senior Officer for the Midlothian, East Lothian and the Scottish Borders, said: “Flora is an example of someone who wants to go above and beyond to help people, and her commitment to her local community in Galashiels has been exemplary.

“Flora is one of very few full-time students serving as a retained firefighter anywhere in Scotland, and is highly regarded by her colleagues and community.

“We are proud to call her one of our own, and to support her fundraising challenge for an important and valued local charity here in the Borders.

“We are also very pleased that Flora is now fully recovered and back on call after a difficult period, and I would like to thank her and all our staff for their unwavering commitment to the service and their communities during this challenging time.”

Flora is fundraising for Friends of the BGH here