The daughter of a retained firefighter based in Blairgowrie has raised an incredible £800 so far for The Fire Fighters Charity by using her baking skills to sell goodies to her local villagers in Perthshire. 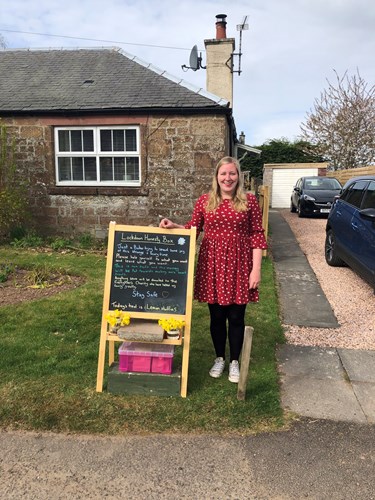 Gemma Larsen, 28, who works at a local farm shop, decided to raise funds after she was furloughed due to the coronavirus.

Each morning, she displays her baked goods in her front garden in the village of Wolfhill, where she’s lived for five years, with an honesty box so that local people can donate to charity in exchange for a cake.

Gemma, whose mother Crew Commander RDS Lorna Rumgay and step father Watch Commander Christopher Smith are both based at Blairgowrie Fire Station, said it’s given her something really nice to focus on: “After I got furloughed, I was bored and felt helpless, but I wanted to do something to help and I know how to bake so it made sense to do that.

“I started off with raspberry brownies one morning and by lunchtime the table was empty so I’ve just kept going. I’ve since made biscuits, scones and cupcakes.

“Not only are my mum and step father serving firefighters, but my grandad George Rumgay also served for 37 years before he retired and The Fire Fighters Charity helped him with a back injury, so I really wanted to support them at this time.

“The locals seem to really appreciate what I’m doing and I’ve had a lovely thank you note from someone who says they look forward to coming to the stall every day.”

Proud mum Lorna said: “Even though she has had to budget to be able to pay all the household bills due to being furloughed, Gemma still thinks of others. A big thank you to all the villagers in and around Wolfhill who have been donating and enjoying Gemma's baking.”

Gemma is also grateful to Blairgowrie Fire Station for helping her to keep stock levels up.

She added: “It’s been hard to get hold of basic ingredients like flour and sugar, but when my mum’s colleagues heard about what I was doing they donated supplies and I’ll keep baking until I go back to work. It’s great that the money raised will make a difference to firefighters.”

As part of Gemma’s plan to help the fire community, she is also looking to take part in The Fire Fighters Charity’s Fire Family Challenge and will be providing recipes along with the Community, Corporate and Events Fundraiser, Margaret Barnes Smith.