A firefighter is successfully mentoring teenagers to overcome challenges and achieve their ambitions by harnessing his own experience of homelessness at a young age. 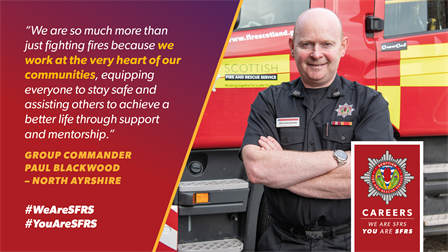 Scottish Fire and Rescue Service Group Commander Paul Blackwood is an experienced firefighter of more than 20 years and has been protecting communities since 1999.

He admits he was “off the rails” growing up in Glasgow and struggled with homelessness, and then faced the further challenge of becoming a young single father.

Paul joined the Service and was supported to balance his childcare needs with his role and after climbing thought the ranks has now enjoyed a long, happy and secure career while his sons have gone on to have their own successful careers.

The proud dad is now drawing upon his past experiences to reach out to young people.

Speaking as the Scottish Fire and Rescue Service opens recruitments for its wholetime firefighter recruitment campaign, Paul said: “I was a product of my environment. I grew up the youngest of six, and my mum died of breast cancer aged 42, I was just seven-years-old.

“I was a tearaway, and there was times when I was completely off the rails, very nearly placed into care aged 12 and  being excluded from primary and secondary schools several times. I made some poor choices and I found myself homeless at one point and lost friends through drugs which was tough.

“I also married at a young age, 19, and had my two boys – but the marriage didn’t last and later I found myself as a young single father with no real qualifications or skills to push my job prospects.”

He decided he wanted to become a firefighter and visited the city’s Springburn Fire Station to find out what skills were required and how to improve his fitness, and he was finally accepted to undertake training at the former college of fire at Gullane.

He became a wholetime firefighter on March 3, 1999 at age 27 and worked at some of Glasgow’s busiest fire stations, but was still able to successfully balance his personal commitments.

Paul said: “You have great people around you who are willing to support you – from managers down to your immediate colleagues – I was really given the support wherever possible to balance my shifts and looking after my boys.

“Where things were slightly more difficult, I knew I could always talk to my colleagues or management, and more often than not a solution could be found that kept the fire appliance on the run, and for me to fulfil my parenting responsibilities and care for my boys."

His older son became became a wholetime firefighter just over 2 years ago after serving in Afghanistan and becoming a British Army sniper whilst his other son as a gas engineer operates his own plumbing and gas company.

Paul is now dedicating his time to helping young people through his role as an MCR Pathways mentor. The SFRS works in close partnership with the nationwide mentoring programme. He said: “I admit it’s not something I thought I would be doing when I first became a firefighter, but it makes absolute sense.

“Here, at the Scottish Fire and Rescue Service, we have the opportunity to be real and positive role models. I see a bit of my younger self in some of these young people, and what we are saying to them is: what you are experiencing now is not you for the rest of your life – you have options.

“Joining the service is definitely one of those options. We are so much more than just fighting fires because we work at the very heart of our communities, equipping everyone to stay safe and assisting others to achieve a better life through support and mentorship. If I can help just one child ... well, that is amazing.”

The wholetime firefighter recruitment campaign – ‘We Are SFRS … You Are SFRS’ –  opened on Tuesday, October 27 and aims to attract more applications from women, ethnic minorities and the LGBTQ+ community. The campaign will remain open with the service accepting applications from across the country on a phased basis, including the west, north and east.

Liz Barnes is the Scottish Fire and Rescue Service’s Director of People and Organisational Development.

She said: “We are a Service who pride ourselves on working at the very heart of our communities to keep people safe and it is therefore imperative that we reflect the diversity of those communities.

“We are actively reaching out through our latest recruitment campaign, We Are SFRS… You Are SFRS, to welcome and support people to take that first step of applying.

“But let me be clear – you will have to hit the standard for your application to be accepted so I would advise everyone to give it great thought and consideration and begin preparing as soon as you can.

“I would urge those who are interested to also follow our dedicated social media accounts and pay close attention to which area we are recruiting for – do not apply if you do not want to work in the current recruitment region.

“This is an exciting time and we are very much looking forward to welcoming the next generation into a Service that is seeking to do so much more for the people of Scotland.”

Apply for the role at https://www.myjobscotland.gov.uk/emergency-services/scottish-fire-and-rescue-services

For detailed information on the role and what will be expected of applicants, including fitness advice, visit https://www.firescotland.gov.uk/work-with-us/wholetime-firefighter-recruitment.aspx

More on becoming a mentor can be found on mcrpathways.org