A special ceremony honours Citizen Firefighter, Scotland’s tribute to firefighters’ past and present. 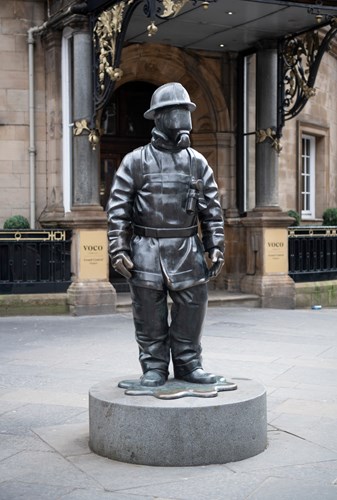 On June 17, 2001, the statue was unveiled on the corner of Gordon Street and Hope Street in Glasgow City Centre.

Commissioned by a group from Strathclyde Fire Brigade, Scottish artist Kenny Hunter created the bronze sculpture to recognise the contribution and celebrate the work of firefighters’ past and present and for their services to the community.

On Thursday, June 17, Chief Officer Martin Blunden led a Long Service Good Conduct ceremony at the statue. This was followed by a rededication ceremony led by the Service’s chaplains.

Speaking at the event, Chief Officer Martin Blunden said: “Citizen Firefighter sits proudly outside Glasgow Central Station and over the last 20 years, it’s been a focal point for residents and visitors to the city.

“In 2014 and 2018 following the fires at the Glasgow School of Art, the statue held messages around its neck in the Mackintosh script to thank firefighters and to represent a beacon of hope.

“Today, we recognise the statue’s 20th anniversary with a rededication and Long Service Good Conduct ceremony, as we celebrate and reflect on that time.”

The Long Service Good Conduct medal is awarded to Firefighters throughout the UK after 20 years’ service. Group Commander Lorna Yuill was part of Maryhill Fire Station’s Green Watch in 2001, who hosted Kenny to give him an understanding of the fire service and the work firefighters do. Group Commander Yuill accepted the medal on behalf of Citizen Firefighter at a ceremony that took place outside Glasgow Central Station.

Chief Officer Martin Blunden continued: “A lot has changed in Scotland over the last 20 years, the Scottish Fire and Rescue Service for formed from eight legacy services and there have a number of notable incidents.

“Now, we’re asking people to take part in a public consultation on our draft long-term vision and help influence the way the Service evolves over the next ten years.

“I would like to encourage you to read our vision document. I would like to hear what you think – positive or negative – as well as understand what’s important to you too so that you, your family and your community feels safe and protected. We want you to achieve a safer Scotland for all, together.”

The consultation runs until Sunday, July 18 and you can read more about it here.