Six individuals have clocked up a combined service of over 240 years protecting some of Scotland's most remote communities. And what’s even more remarkable is it’s all been done on top of their day jobs. 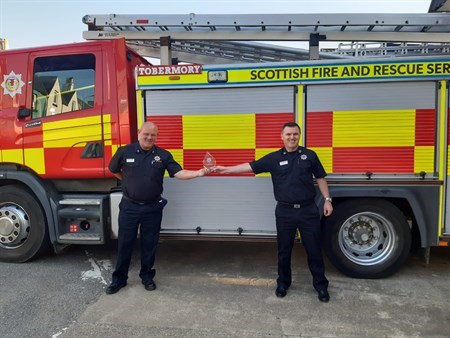 Mainland based Donald Smith, Kilmelford, and Ronald Ross, Arrochar alongside islanders Graeme Smith, Islay and Mull trio Richard Henderson, Iain Noble and Gordon Rutherford are retained and volunteer firefighters who have each dedicated the last four decades of their lives to keeping people safe.

Area Commander Joe McKay, Local Senior Officer for East and West Dunbartonshire, Argyll and Bute commended their commitment. He said: "Serving your community as a retained or volunteer firefighter is a huge commitment. To continue to do so for 40 years is an absolutely incredible achievement and I would like to thank them all for their service over the years.

“Each one of them has made a huge difference to their local area during this time, and they have played their part in protecting their neighbours and visitors to these areas.

Following in the family footsteps is common theme for signing up as Iain Noble explained. He said: “My dad served for more than 28 years and any chance I got as a youngster I was at the station. By the time I joined up he was my gaffer!”

As well as keeping the local fleet of West Coast Motors buses on the road in his day job, Iain is a Watch Commander at Tobermory Station and he explained why he has served for so long.

“I really enjoy my role and have a great crew who make the station what it is,” Iain said. “We have enormous pride in the service we provide to our communities and we get huge support from them.”

Ronnie Ross also got the bug to join early in his life. He said: “My dad was in the Service in Arrochar from its inauguration in 1961 and I grew up with alarms going off in the home to alert him to incidents. As soon as I was old enough I applied to join and I finally secured a post in 1980.”

A local builder by day Ronnie described what’s kept him involved in the Arrochar Station for so long saying: “I’ve attended many incidents and still get the same adrenaline rush when the pager is activated. The need to help and assist folk in their hour of need is still strong. I have learned and benefited from the training in many ways which has helped me in my private life and employment.”

It wasn’t so much as a calling as a command for marine mechanical and electrical engineer Donald Smith of Kilmelford Station that led to him joining up. He said: “I was ‘ordered’ by my father-in-law to apply and when I thought about it I knew that I was able to respond and help my community and I signed up. I’ve had a great 40 years and I also enjoy the social side of the service and raising money for charity.”

When crofter Gordon Rutherford of Bunessan isn’t tending to his prize-winning sheep he’s busy with his day job as stonemason at Iona Abbey keeping the popular attraction in pristine condition for the many visitors that make their way there each year.

Self-employed builder Richard Henderson started off his fire service career in Tobermory then moved to the station in Salen after getting married. Bowmore based mechanic Graeme Smith’s father and uncle both served as firefighters locally and he choose to follow the same path.

When restrictions allow the individuals will have their service recognised and be thanked in person for their achievements. Firefighters Graeme Smith, Iain Noble and Richard Henderson were thanked earlier this month for their commitment when AC McKay visited Islay and Mull to meet with the crews based there.

Commenting on the legacy the six have passed on Mr McKay said: “The wealth of experience they have gained has allowed them to contribute to the development of our current crews and will ensure the skill and professionalism they have displayed over the years continues with the future generations. We are always keen to hear from people of all backgrounds and walks of life who want to consider a rewarding career like the ones described.”

To find out more prospective candidates should visit our website at /work-with-us/retained-firefighters.aspx