Operations Control staff member Magda Kozlowska received the urgent 999 call from the resident as flames took hold in his city flat, trapping him inside with no means to escape. 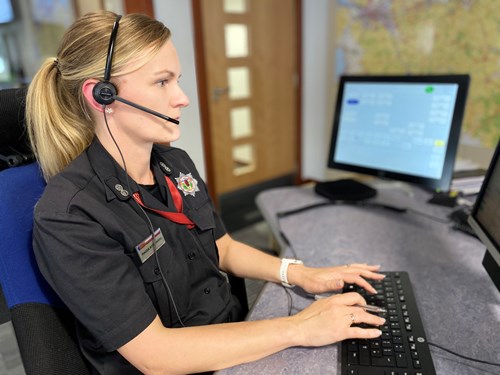 A fire service Watch Commander has described how she gave advice and reassurance to a man trapped in an Edinburgh house fire as she mobilised firefighters quickly to the scene.

Operations Control staff member Magda Kozlowska received the urgent 999 call from the resident as flames took hold in his city flat, trapping him inside with no means to escape.

Magda, a former English language teacher, provided him with the advice he needed to survive the blaze until firefighters arrived at the scene.

The next day, the man sought out his rescuers at Tollcross Fire Station - and asked them to thank Magda personally for saving his life.

Magda, originally from Zamość in Poland, spoke about her vital role as the Scottish Fire and Rescue Service launches a national campaign to recruit Operations Control staff in Edinburgh and its two other control rooms in Johnstone and Dundee.

Magda, who joined the service in 2007 in an admin role, said: "That call sticks with me - I still remember his name.

"It was still early in my control room career, but my training came to the fore and I was able to give him the advice he needed to survive the fire and the smoke, while mobilising the appliances and guiding the firefighters to the room he was trapped in.

"The firefighters were the ones who went in with the hoses and the breathing apparatus - but until then I was his lifeline and his only connection to the outside world.

"It's an incredible feeling - especially when someone reaches out to thank you and show their appreciation. Every 999 call has someone's mum or granny or brother or uncle on the end of that phone - and when you can walk away knowing you have made a difference … well, that's amazing."

Magda decided to join Operations Control after getting a glimpse of the highly trained staff in Edinburgh in action on a busy day.

She said: "I was visiting control regularly, but there was one day in particular I came in and it was incredibly busy. Everyone was doing something but it was obvious that everyone had their place, their role, and they were working as a team to meet several 999 emergencies at once.

"I came out of there after seeing that team dynamic and I knew it was where I wanted to be and what I wanted to do. Now I've been here 11 years and that feeling hasn't changed - when it's busy and we all work as a team to support each other and use our knowledge, skills and training to get the job done it’s certainly worth it."

Read more about the role and apply here: https://www.myjobscotland.gov.uk/emergency-services/scottish-fire-and-rescue-service/jobs/firefighter-control-various-locations-242089