A firefighter has reflected back on her career and called on others to follow in her footsteps as she is recognised for an outstanding 30 year commitment to protecting communities. 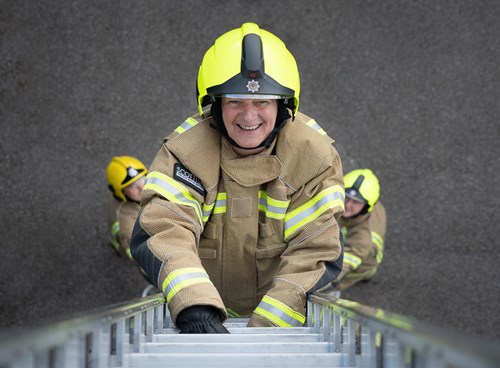 Lorraine Taylor is part of the Scottish Fire and Rescue Service’s on call workforce and is based at Tarbert Fire Station in Argyll and Bute. On call firefighters respond via pager to protect rural and remote communities and often balance saving lives with their primary employment and family life.

Lorraine, who signed up as a 22-year-old in the early 90s, said: “There were no women in the job when I joined. That’s just what it was like. I was the one going into a man’s job. I wanted to do it and I wanted to get in – so I just got on with it. Now we have more women in the Service. At nearby Campbeltown Fire Station, there’s five female firefighters. It’s great to see and it’s very encouraging … because it’s a job women can do.”

Lorraine is originally from Cumbernauld, Lanarkshire and as a 16-year-old she went to Tarbert to work in one of the local hotels during the summer. She stayed and was encouraged to apply to become an on call firefighter by some of the local crew.

One of her first call outs was to attend a chimney fire. “It was a high building,” she recalled. “I looked up at the roof thinking I’ve to go up there. But I had to do it sometime, I just did it and it felt like the whole village was watching.” 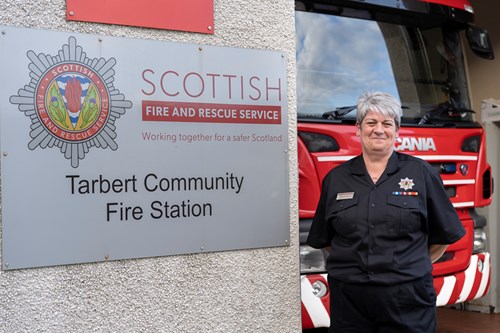 She feels a sense of pride when she remembers the times when firefighters have assisted a casualty to safety. “You feel as if you have made a difference. You have been there and helped someone when they needed you.”

The area Lorraine serves is vast and rural. The range of call outs highlight how varied the role is, from rescuing animals to incidents involving fishing boats and hill fires. As well as being an emergency service, the crew helps to raise safety awareness as well as charity funds for the local community.

Lorraine said: “Everyone mucks in and donates money which goes back into the village. We’ve built the Christmas tree from fish creels and we bring Santa in the fire engine. All the kids love it and I get a lot of enjoyment from seeing the kids so happy.” She added: “Community work is such an important part of the role, it builds relationships and allows us to give people safety information to help keep them safe.”

The station also works in partnership with other agencies such as the Scottish Ambulance Service and the local Coastguard and this can involve open days to give life-saving safety advice to young people. 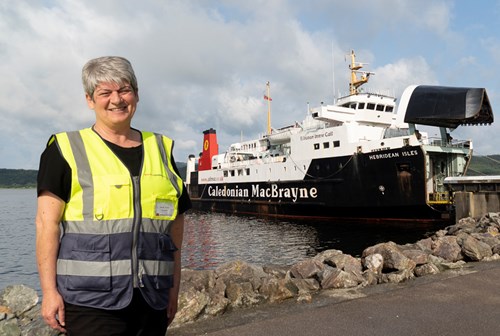 Lorraine works full time for Calmac as a Senior Port Assistant based at Kennacraig – where she also acts as a role model.

She said: “Mooring the boats has always been a man’s job, it is hard work and I am training some younger women. One of them heard me on the phone calling myself firefighter Taylor, she thought it sounded great and I told her she could do that too.”

Although Lorraine has reached a milestone of 30 years’ service as an on call firefighter, she isn’t planning on retiring just yet. “It is an achievement,” she said. “But I don’t like a fuss. I will miss it when I eventually leave. Being an on call firefighter has been part of my life for so long, the crew is like my family and I would certainly encourage others to join.”

He said: "I am immensely grateful for the dedication of people like Lorraine. Thirty years is a remarkable commitment to protecting others and I'd like to take this opportunity to thank Lorraine for her sterling efforts throughout the years.

“We are calling on others to follow in her footsteps, learn new skills and work as part of a close team to help keep people safe. We are committed to representing the diverse communities we serve so we are urging people from all walks of life who have different skills and experience to apply for this role.

“As a service, we are working to support recruitment as it can be challenging within rural and remote communities. We have established a National On Call Leadership Forum which is identifying and driving improvements in recruitment.

“We have already introduced a pre-recruitment engagement programme which introduces candidates into the station environment for up to 12 weeks to more fully understand the role. We have also appointed 54 on call support officer posts to maintain appliance availability and assist training.

“We are committed to driving forward improvements and we will continue to engage and work with key stakeholders and communities to achieve this.”