Donor overcomes fear of needles to help save someone’s life

A donor who found she was a match on the Anthony Nolan Stem Cell register – overcame her fear of needles to help someone in need. 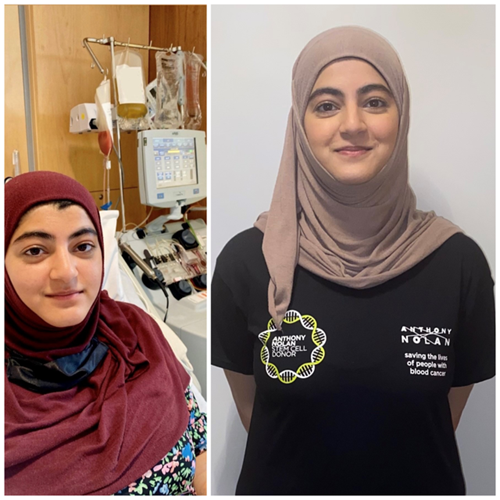 Student Maaria Aziz signed up to the blood cancer charity’s register when she was 17 and a pupil at Dalziel High School in Motherwell.

She was recruited to the register through a school engagement event organised by the Scottish Fire and Rescue Service (SFRS) as part of their charity partnership work to support the Anthony Nolan charity.

Four years after signing up to the register, Maaria was surprised to get an email and a phone call to say she was found to be a match for someone waiting for a transplant.

The 21-year-old who lives in Motherwell said: “It was a surprise because I had forgotten all about it. I really didn’t know what to expect. I actually have a fear of needles, and to be honest I wasn’t sure about going ahead with it.”

When Maaria was contacted by the charity, she did her research and was also reassured by the Anthony Nolan Charity, who explained the process to her.

And she also spoke with her parents, who were also a bit apprehensive.

Maaria said: “They hadn’t heard of it before and they were a bit worried. When the nurses visited me, they explained everything to my mum and dad, all about how it could help someone and how important it was. And they were reassured. I don’t think they really comprehended how much it would help someone.”

In September Maaria travelled to London to donate her stem cells just before she went back to Glasgow Caledonian University, where she is in her third year of studying orthoptics.

She said: “The timing was good because I wasn’t at uni and I was able to take the time to go. I felt fine afterwards, I just had a bit of a sore arm.

“It feels really good to be able to do that for someone. I’m really glad I did it.”

“SFRS has done remarkable work in finding potential donors for people who need a lifesaving stem transplant. It is fantastic to hear about amazing people like Maaria who was signed up through SFRS and overcame her fears to give someone a second chance at life.

“It’s vital that as many people as possible sign up to the Anthony Nolan register - especially those from minority ethnic backgrounds. Donors like Maaria increase the chances of patients from minority ethnic backgrounds finding their perfect matches. We look forward to continuing this crucial partnership as we work together to further diversify our register and find more lifesaving donors.”

The SFRS partnership with charity Anthony Nolan was formed in 2009. This has now seen 18,500+ potential donors recruited to the register, with 99 of those going on to donate stem cells.

Anthony Nolan recruits people aged 16-30 to the stem cell register as research has shown younger people are more likely to be chosen to donate.