Two Scottish Fire and Rescue Service personnel with a combined service of more than 70 years say they're proud to receive a King’s Fire Service Medal in the New Year Honours.

His Majesty The King awarded the medal for distinguished service to on call Watch Commander Alan Aitken from South Lanarkshire and on call Crew Commander Robert Strang from Argyll and Bute.

To date, both recipients have served the communities where they live, in Douglas and Carradale, for the duration of their careers.

Their sons have also followed in their footsteps by joining the Scottish Fire and Rescue Service. Alan's son Ryan is an on call Crew Commander in Douglas and Robert's son Gareth is a Watch Commander in Dumbarton.

Watch Commander Aitken, who's served for 34 years, said: "It's an honour and, to be quite truthful, my wife and family deserve it more than me for what they've put up with over the years, especially when you're getting ready to go to family parties or weddings and you're late because you're on call.

“The crews I've worked with throughout my career are also a part of this too. I just love the job and helping people in my own community.” 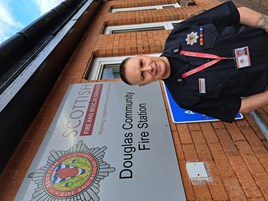 It's been 38 years since Crew Commander Strang started his career with the fire and rescue service. He combines his on call role with his job as ground keeper at his local golf course.

He said: "I've been in Carradale all my life, born and bred here. I never thought I would ever receive something like this and I'll wear the medal with pride.

"I was over the moon when I found out and it was quite emotional reading the letter confirming the award. My family, colleagues and people in the community will be very proud too." 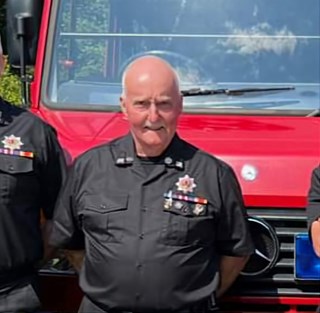