Santa has been extremely busy this year in the Scottish Fire and Rescue Service. From Ayrshire to Aberdeenshire and beyond – he’s visited our fire stations and brought smiles to children’s faces and to our local communities.

Giving his reindeers some rest before they get ready for Christmas Eve, Santa has been seen arriving by fire engine in places such as Lossiemouth, Rothes, Fochabers and Hopeman in Moray, and on the back of a trailer in Forres.

He’s had lots of support, not only from our firefighters but from all our staff working across the country.

Our firefighters and staff have also been spreading Christmas cheer all around the country by delivering food donations, children’s toys and gifts, as well as important safety messaging to all our communities.

Money has also been raised for various good causes, including local community groups as well as for The Fire Fighters Charity and Family Support Trust.

To bring all of this together we have worked in partnership with many local businesses and had the support of many others – and we thank them all for their help, and this is just a little snapshot of some of the work that has been going on.

We wish all our communities a very happy and safe Christmas. 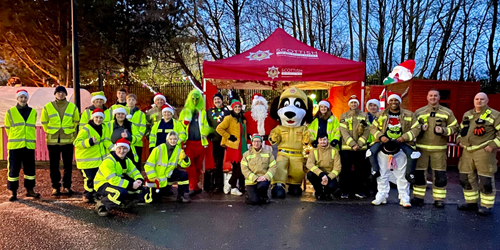