A high-ranking PA for the Scottish Fire and Rescue Service has bravely shared her experience of racism and spoken candidly about how it continues to cast a shadow over her life. 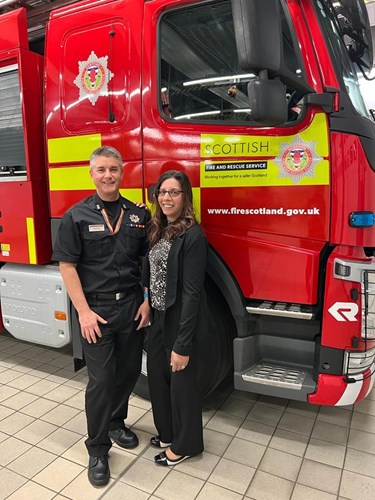 Charmaine Jones suffered horrific racial abuse as a child and was once followed home from school and punched in the face by a boy because of the colour of her skin.

But – four decades later – Charmaine insists that racism continues to exist in society and revealed how she still takes steps to protect herself such as avoiding late night public transport.

The 47-year-old was once even warned to prepare for a backlash over an Indian strain of COVID-19.

The Executive PA to SFRS Director of People and Organisation Development, Liz Barnes, shared her reality as the SFRS marks International Day for the Elimination of Racial Discrimination, on March 21.

The global event aims to foster a culture of tolerance, equality and anti-discrimination - and calls on everyone to stand up against racial prejudice and intolerant attitudes.

Charmaine, known to friends as Char, said: “I am proud to be Scottish and I am proud of my Indian heritage. I have a very positive outlook on life.”

But she added: “There is still racism in the world. It does exist – one hundred per cent. You can feel it; sense it in the pit of you belly that someone doesn’t like you because of the colour of your skin.

“People need educated. I am sorry to say that I honestly don’t know the answer.”

She was born in 1974 and was one of five children who grew up in a “very happy and very loving” home in Grangemouth with parents, Matt, a paramedic, and full-time mum, Audrey.

Charmaine said: “We didn’t realise we were the only multi-racial family at the time but we stood out like a sore thumb. We were all picked on for the colour of our skin. From the N-word to the ‘P***’ word to others like ‘Darkie’. All those really, terrible, horrible names.

“I was called ‘P**’ at primary school and told that I was dirty. No one would want to hold my hand or pick me for teams. People always had a best friend but I didn’t. You would latch on to someone else who was getting bullied for some other reason and you would be friends with them.

“One time a boy punched me in the face because of the colour of my skin. He broke my glasses and chipped a bone in my nose. Mum was angry and upset, and went to the school but I do not recall what happened to that boy. It would have aggravated it anyway so I just shelved it in my brain.”

She added: “He had called me ‘P***’. The thing is, I wasn’t Pakistani. My heritage is Indian and I am Scottish. It was clearly an ignorance with his parents because kids are not brought up to be racist. Perhaps he was told that brown people are only good for having shops or cooking or whatever.

“But I felt sorry for him as I had really good parents who dried my tears and told me that I was amazing and that I was beautiful so I am proud of who I am now.

“I just hope it is now recognised and flushed out of schools because it has also shaped who I am now. You are resilient and learn not to take it personally … you realise it is their ignorance.”

As a teenager, Charmaine went on to achieve sporting triumph in athletics, training six nights a week with the Falkirk Victoria Harriers in long jump, sprinting and hurdles. She even trained with the Scotland squad as a reserve.

Her father was a coach and encouraged her into the sport aged eight. She said: “I just loved it and it was a comfortable environment.

“There was the odd time you would hear someone say, ‘you can beat the P***’. I would tell my dad and he would say, ‘you run … you run harder and you run faster - and you beat them’. And he would always tell me to shake their hand afterwards even if I won or lost.”

But Char says that the spectre of intolerance still looms large and she will cut socialising with friends to avoid late night public transport. “I feel vulnerable sometimes,” she admitted.

“If I have a night out in the city, then I ensure I get on the earlier train. It isn’t because I am a single female but the colour of my skin. I want to avoid that bracket of people who could cause hassle.”

Charmaine will also steel herself for a racial backlash following negative news headlines including as recently as last summer when players on the England national team endured a torrent of racist abuse after the team’s loss at the 2020 Euro, including 23-year-old Marcus Rashford.

She said: “There is a knock-on effect of headlines involving black and ethnic minority people. You can get told to back home and you are obviously intimidated if it is a group. You cannot confront it - you just get your head down or you might get beaten up.

“I even got a call from my brother about the COVID-19 Delta strain to say that he hoped no one would blame it on me because I am Indian. It is just the same as when things are going on in the Middle East. It is a horrible world out there. No matter what, you know you will be judged by the colour of your skin.”

Charmaine, who is married to Watch Commander Neil, added: “All I can say is that I know how to look after myself. I have my husband and my brothers around me. I do have my moments of sadness but I get on with it. I have a good life - and all of this has just made me stronger.”

Ms Barnes, said: “Char is a delight to work with and I don’t know many people who have such a positive, fun and friendly outlook on life – she is simply ‘Char’ to everyone who knows her.

“I have heard her discuss some of the situations in which she still finds herself and this includes abuse on trains as well as inadvertent comments by well-meaning people which can be hurtful.”

She added: “This is why we need to continue to highlight these issues so that people like Char can feel free to go about their daily lives without having to consider the impact her skin colour may have when she meets new people or is simply going about her daily life.

“I’m really pleased she feels able to share her story and hopefully it will serve to inspire and educate those who read it.”