The Fire Fighters Charity has published the results of their national January Bag It and Bank It Recycling Championship, where Lanark Community Fire Station took first place in Scotland, having collected an amazing 1.8 tonnes of clothing and generating an income of £392. 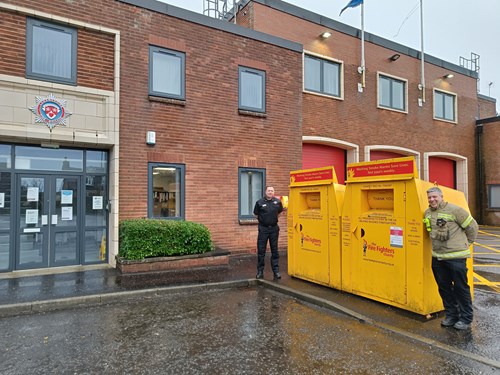 Across Scotland there are more than 100 clothing banks located at fire stations.

He said: “The Service is delighted to support the efforts of the charity which provides vital well-being services to firefighters.

“It’s fantastic that the community of Lanark has been so generous by filling up the bank at Lanark Community Fire Station with their unwanted items.

“We encourage people to keep donating, wherever they live, if their local fire station has a yellow bank outside.”

The January Bag It and Bank It Recycling Championship has seen a total of £84,827 raised for the charity – more than £10,000 over the total raised in 2020, when the competition was last run.

They have collected more than 386 tonnes of unwanted clothing which has been dropped off at their clothing banks located outside 928 fire stations across 44 fire and rescue services.

This nationwide effort not only helped to divert a huge amount of unwanted clothing away from landfill, but it will also help The Fire Fighters Charity continue to support thousands of fire and rescue service personnel with their health and wellbeing needs, when they need it most.

The second station in Scotland was Bishopbriggs, who were 15th on the national leaderboard with 1.68 tonnes, while Kilsyth was 18th with 1.65 tonnes.

“Seeing the efforts that individual stations have gone to this year to make our recycling drive such a success has been incredible – the result says it all.

“If it wasn’t for these generous donations, we simply wouldn’t be where we are today. Clothes recycling is such an important revenue stream for the Charity and these funds will go a huge way in helping us to continue to support thousands of fire and rescue service personnel every year.”

Lanark will receive a ‘Rag’ Trophy and hamper at a presentation on March 16.