With the risk of wildfires rated as ‘very high’ in Scotland this weekend and into next week, the Scottish Fire and Rescue Service has urged the public to take the utmost care in the countryside. 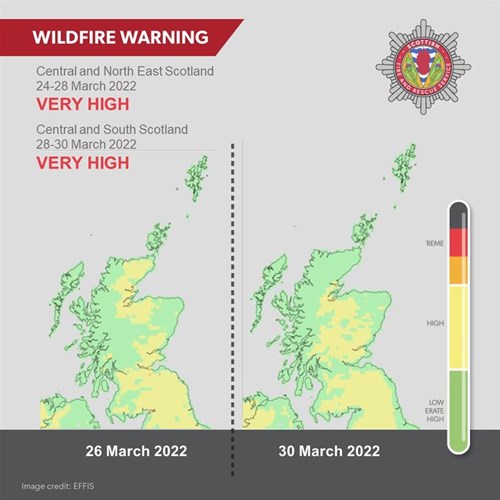 The wildfire warning follows a series of wildfires across Scotland over the past week including a large fire on Ben Lomond which took two days to extinguish.

The weather pattern over the next few days – dominated by high-pressure, variable winds and temperatures peaking at 17°C – increases the risk.

The warning applies from today, Friday 25 March and lasts until Wednesday 30 March.

Accumulated dead grass, leaves, twigs and heather on the ground at this time of year dries quickly in light winds and, when ignited, acts as fuel which can spread wildfires over a wide area.

People who live, work or are visiting rural areas, in particular, are being urged to exercise the utmost caution to avoid fires breaking out.

SFRS Group Commander, Niall MacLennan said: "Numerous wildfires across Scotland this week, including large fires on Ben Lomond and near Mallaig have shown how real the danger of fire is in the countryside and how damaging it can be to the environment, wildlife and nearby communities.

“With rising temperatures this weekend and further dry conditions into next week, wildfires could burn and spread with very high intensity in high-risk areas.

"Therefore, we are asking people to act responsibly when enjoying the outdoors and please think twice before using anything involving a naked flame."